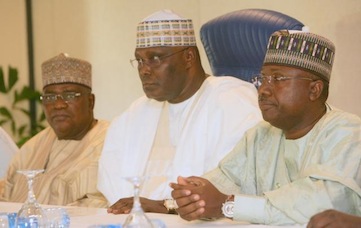 Atiku noted that the events of the last few days have shown that the Nigeria’s military has been overwhelmed by the insurgents and there is need for the world community to come to the aid of Nigeria to stop the sufferings which the advance of the terrorists has been inflicting on the citizens in North east part of the country.

The former Vice President said this on Monday at an international press conference he called to express his sadness about the capture of Mubi, one of the largest towns in Adamawa state, northeast Nigeria, by Boko Haram last week.

Atiku, who is from Adamawa state said Mubi which in recent weeks and months has played host to displaced persons fleeing from further north after their communities fell to Boko Haram is now at the mercy of this terrorist group.

The Turaki of Adamawa said the people in the north have had to suffer for far too long as a result of activities of terrorists with thousands fleeing their homes, while their houses and farms have been destroyed while many others do not know where to go or how to restart their lives.

Though he said the situation should not have been allowed to get to this stage, Atiku lamented that this is the situation Nigeria has found itself today.

“That is the degree to which we have become as a country. I say this with reluctance and with shame. The situation in which we find ourselves today is grave,” said the former vice president who noted that much of Borno, and the north of Adamawa and Yobe states is already at the mercy of the terrorists.

He noted that the terrorists had started the capture of Nigerian territories when a few months ago they captured Bama, which is nearly 400 kilometres from Yola, capital of Adamawa state, followed by Gwoza, where a terrorist caliphate flag has long been hoisted and other towns like Pulka Limankra, Madagali, Gulak, Michika, Bazza. Lassa and Uba which he noted was the latest town captured before the terrorists trampled on Mubi.

Atiku noted that people from the captured areas have been pouring into Yola for safety.

“We were told that the budget for security was going to be enlarged so that the security agencies and military would be in a better position to tackle the insurgency.

“How is it possible that a great nation like Nigeria should find itself in a situation where a handful of terrorists is able to invade a town as large as Mubi with a population of about 300,000?

“How were the insurgents able to so easily take a town of this size, and the people find themselves defenseless and undefended? How is it that the people have been made to suffer as they have?” Atiku queried.

Atiku who said he had previously cautioned himself against speaking on the insurgency so as not to be seen as distracting government and the security forces grappling to contain Boko Haram said the scale of injustice the people of Nigeria are suffering has reached a stage where he is obliged to amplify his concerns.

“Many of our citizens are unable to come to terms with why a so-called “Africa’s best army” has been unable to confront this horrendous situation and are increasingly assuming that this whole thing is about electoral politics.

“They suspect that the seeming inability of the government to end the crisis is a ploy to weaken some parts of the country ahead of the 2015 elections. Can we, in all honesty, blame them for having those suspicions?

I call upon the international community to help us. I am making a special appeal to countries with sufficient know how and experience in tackling terrorism to increase their assistance to us.

The relief agencies that are already working here should please double their efforts. And all people of goodwill should help in any way they can and to do more than they have been doing to alleviate the pain and suffering that we Nigerians face through this insurgency.

“At a time when we are constantly bombarded with horror stories of ugly events elsewhere in the world – here in West Africa, we are faced with the Ebola epidemic and other trouble spots – I draw your attention to a humanitarian crisis which is also a matter of international security.”

“This Boko Haram insurgency has been with us now for several years but has, in these last few days, taken a step further towards being a disaster of unimaginable proportions.

“Hundreds of thousands of people are at risk. Nigeria needs the world’s support.

“The world must not abandon Nigerians in our time of need,” Atiku said while calling on the international community to come to the aid of Nigeria.