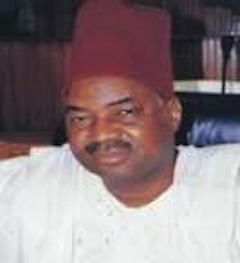 Members of the Edo State House of Assembly were this morning thrown into mourning, following the death of one of its members, Hon. Peter Usman Aliu.

Hon. Aliu, of the All Progressives Congress (APC), who represented Etsako East constituency 1, reportedly died this morning at about 8:00 a.m. at the University of Benin Teaching Hospital (UBTH). ‎

The late lawmaker who had been on treatment for undisclosed ailment for months now, had recently collected expression of interest and nomination form for next year’s general election.

When P.M. NEWS visited his resident at the Legislators’ quarters this morning, the widow of the late lawmaker and other family members were all in mourning mood.

Younger brother of the late lawmaker, Haruna Shugaba Aliu, said that the family has accepted their fate, adding that no one can question the almighty God when death comes calling.

Born in Igbiode-Agenebode in Etsako East Local Government Area of Edo state, Aliu attended St. Peter’s Grammar School Agbenebode for his secondary education and then proceeded to Federal Polytechnic, Auchi. He later proceeded to England in 1976 as a federal scholar to study for his Accountancy professional examination. Hon. Aliu also bagged a BA in Law and was called to Bar in 2000. He then added a Masters degree at the Ambrose Alli University, Ekpoma.

He is currently serving as a second term member of the Edo State House of Assembly representing Etsako East Constituency on the platform of ACN.

He is the Chairman House Committee on Appropriation and Project Monitoring. A devoted Catholic, he is married with children.