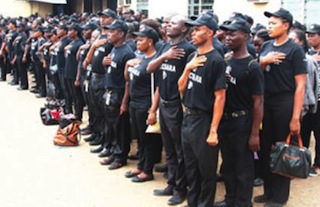 LASTMA officers were forced to vacate the expressway as the federal taskforce took over traffic maintenance.
The Sure-P Task Force officers were seen around Ketu area as well as the Toll Gate, where their operation base is located. Three officers were each stationed at various points within a distance of 10 metres along the highways.

The officers dressed in black trousers and black t-shirts, looked business-like as they went about their duties.

A LASTMA official who craved anonymity said that the Sure-P/FERMA taskforce stormed the road around 7:00 am with sticks and iron metal to manage traffic on the Federal roads in the state. The officer said they stormed the Lagos-Ibadan Expressway, Ojota and Ikorodu road and distorted LASTMA activitites.

“Few minutes later when they discovered that our officials didn’t yield to their directives, they attacked them. And our officials were forced to leave the Lagos-Ibadan Expressway,” the official said.

The LASTMA official added that on 23 October, “they attacked a LASTMA official who was managing traffic on the Lagos-Ibadan expressway. They brought out guns and that made everyone to scamper for safety. On that day, motorist abandoned their vehicles to avoid attack.

“And today, their activities led to traffic gridlock on the road. In fact, the traffic didn’t subside until 1:30 pm,” the officers said.

As at Monday afternoon, officers of Sure-P/FERMA taskforce were sited directing traffic on federal roads with LASTMA officials out of the roads.

National Coordinator of the Sure-P federal Task Force, Abdul Razak Otto had earlier refuted claims that the officers were engaged to disrupt the 2015 elections in the state, saying that task force was not only set up in Lagos but across the 36 states of the federation, with no sinister motive.

“We are not out to cause crisis in Lagos or any of the states in the country. Whatever we are doing is legal and we are bound by the law of the country. The question one should ask people making this insinuation is, does the President complain to you that we are doing illegal things here? Does the State Security Service, SSS, complain about our activities? This is a federal government programme for all states,” he said.

However, the Sure-P/FERMA agency has so far recruited about 7,000 taskforce to take over federal roads and has begun to erect notice boards on Federal roads in the state, informing the public on its mode of operations.

According to Otto, the task force officials are to assist the federal government to recover some of its properties in Lagos from illegal occupants as well as the Federal Government to recover and maintaining right of way, control and manage traffic, ensure adherence of residents to road setbacks and enforcement.