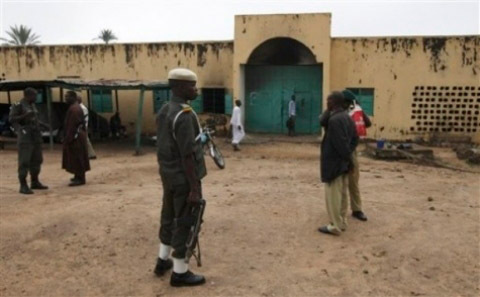 Gunmen armed with dynamite freed at least 50 inmates in a raid on Koton Karfe Prison,Lokoja, in the central Nigerian state of Kogi.

The same facility, was attacked by Boko Haram insurgents in 2012, police said Monday.About 119 inmates escaped then.

“They blew up the thing with dynamite,” national police spokesman Emmanuel Ojukwu said of the attack which took place late Sunday.

“Up to 50 inmates escaped,” Ojukwu added.

It was not clear whether the latest attack was also carried out by the Boko Haram insurgents. But in the latest video of the insurgents released on Friday, Abubakar Shekau warned of more attacks on Nigerian targets, after recent bombing in Bauchi and Gombe.

“There is no any ceasefire or dialogue with anyone instead it is a war with beating and killings, and guns that we are hungry for like food with Maggi cubes. We are on course; our focus and determination is to see that only Quran is being use in running the world, with Allah this is what we put ahead of us.”, Shekau said.