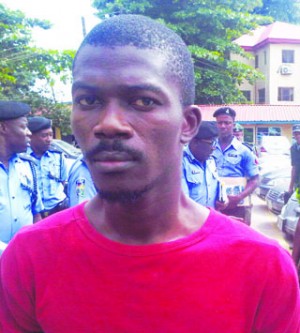 •The suspect, Moses Andrel who confessed that his wife knew he was robber

A suspected car snatcher and Liberian refugee in Nigeria,  has confessed that his wife, who is a Nigerian, knew he was an armed robber before he married her because he tells her whenever he was going out at night for operation.

The suspect, Moses Andrel, also revealed that whenever he goes out at night, his wife would pray and wish him well.

The 25-year-old Andrel said though he does not discuss his criminal activities with his wife,  he usually gives her some money to keep and spend after he returns from a successful operation.

He said before he quit driving, he told his wife about his decision and when he started going out in the night, she knew he was going to rob.

“My wife has a boy for me and is pregnant and she knew all my movement but I didn’t discuss everything with her,” he said.

Andrel said he quit driving for car-snatching because of the huge money he was making from snatching cars in Nigeria.

As a driver distributing sausage rolls to customers, he said he was earning between N20,000 and N25,000 a month as salary but when he quit driving and joined a car snatching gang, his income increased asronomically to N200,000  a month.

He said he did not find it difficult to be a car snatcher because he was already a driver and what he did was to look for a driving job and when his employuers assign him a car, he would sell it and relocate to another city in Nigeria.

He confessed that he sold some cars in Lagos and relocated to Oyo State where he was eventually arrested by the police.

On how he came to Nigeria, he said he came as a refugee and started his driving profession before he met his friend, Nana, who convinced him to go into car-snatching.

Andrel revealed that they have network across cities in Nigeria and that was why it was possible to sell off any snatched car through their network.

He mentioned Alhaji Tanko as their big customer living in Abuja and said once any of his gang snatches any car, Adebayo, a panel beater, would first change the engine and chassis numbers of the vehicle before they end it to Alhaji  in Abuja who pays them immediately.

He said they target brands such as Toyota Camry, Nissan,  Honda and SUVs and usually sell them for between N250,000 and N300,000 to Alhaji.

He said he is now regretting his decision to join the gang because he did not anticipate that he would be arrested one day.

Andrel was arrested along with four other members of the gang who were paraded last week by the Lagos State Commissioner of Police, Mr. Kayode Aderanti.

Those arrested along with him are Alhaji Mahmud Abdulakeen Tanko, 48, Musa Yusuf, 27, Israel Nana, 30, and 53-year old panel beater, Abayomi Adebayo, who changes the engine and chassis numbers of stolen vehicles for the robbers. Sixteen vehicles were recovered from the gang.