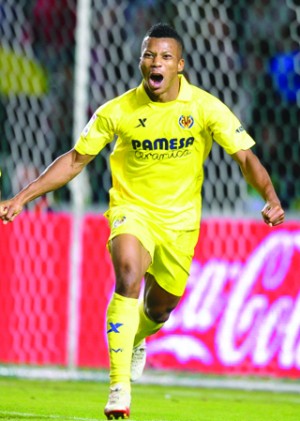 Though he has been out of favour in his country’s national team, as the Chief Coach, Stephen Keshi overlooked him in the past two years, Nigeria international striker Ikechukwu Uche made history on Sunday in Spain’s Primera División when he broke the record of appearances made by any Nigerian in the country’s top flight.

Uche was conspicuously the best Nigerian striker in Europe last season but was ignored as Keshi opted for other strikers during the Super Eagles’ World Cup campaign.

However, Uche was on for 71 minutes in Villarreal’s 1-3 loss to Valencia at Camp El Madrigal and wrote his name in the history books in the process.

The Nigerian has now made 176 appearances in the Primera División, more than any other Nigerian has previously managed.

Sunday’s feat saw him surpass the number of appearances previously made by two former Nigerian internationals in the competition.

Mutiu Adepoju and Finidi George, who both played professionally in Spain, both made 175 appearances in the Primera División.

Finidi reached the landmark with two Spanish clubs, RCD Mallorca (where he had two stints) and Real Betis Balompie while Adepoju racked up his total with Real Madrid, Racing Santander, Real Soceidad and Salamanca.

Uche, who has played his entire professional career in Spain, scored 40 goals in the Liga with Recreativo Huelva, Getafe, Real Zaragoza, Granada and Villarreal.

He had earlier played for non-league Nigerian club, Amaze United. Uche has scored 18 goals in 44 appearances for Nigeria at senior level.

Meanwhile, Uche took to social media to celebrate his recall to the Super Eagles by reinstated Head Coach, Keshi.

Good for his damaged public relations, the Nigeria manager has tried to pacify the fans by handing the 30 – year – old his first call – up to the national team since the 2013 African Cup of Nations.

“Happy to be among those selected to play Congo and South Africa. God bless Nigeria @NGSuperEagles #qualifiers #AFCON2015,” a delighted Ikechukwu Uche said on Twitter.

The former Getafe and Real Zaragoza forward has not scored for the African champions since his 72nd minute strike in the 6 – 1 win over Liberia in an Afcon qualifier back in October 2012.

That said, Ikechukwu Uche has hit target for the national team more than any other player (18 in total) named in the squad list by Keshi for the qualifiers this month.