5 Burnt To Death In Auto Crash 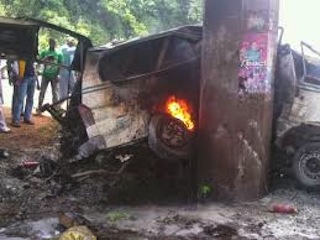 Two other people had severe burns and were rushed to the Gbagada General Hospital for urgent attention.

P.M.NEWS gathered that the accident occurred around 9:00p.m. when the brake of an articulated truck with registration number EP 896 SK failed and the truck rammed into stationary truck loaded with alcoholic contents which led to an explosion.

A Honda saloon car with registration number BBG 638 BP driven by Mr. Adebayo Ahmed, a manager at Habon Petrol Station, was said to have also rammed into the articulated truck.

Ahmed was said to be coming from Ewedegbon and was on his way to Egbeda after the close of work.

General Manager, Lagos State Emergency Management Authority, Dr Femi Oke-Osanyintolu confirmed to P.M.NEWS that five people died and were burnt beyond recognition, adding that two other people sustained serious burns and had been rushed to the Trauma and Burns section of the Gbagada General Hospital.

“Our men, fire servicemen and the police from Igando were on ground. One of the dead bodies was picked from the gutter, with three other occupants on the truck that exploded and the 5th one from the articulated truck. The deceased have been deposited at the Mainland General Hospital,” he said.