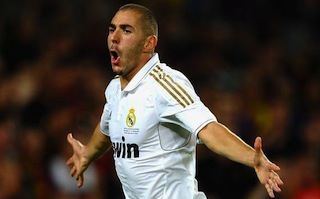 Karim Benzema jubilates after scoring the only goal of the game

Real Madrid cruised into the Champions League last 16 as Karim Benzema’s solitary goal continued their 100 percent record in Group B with a 1-0 win over an under-strength Liverpool.

Liverpool manager Brendan Rodgers had sprung a surprise by naming a side missing a host of first-team regulars, including captain Steven Gerrard and Mario Balotelli, who were left on the bench ahead of a crucial Premier League clash with Chelsea on Saturday.

And despite a more spirited showing than in their 3-0 defeat to Madrid at Anfield two weeks ago, Benzema’s first-half winner condemned them to a third consecutive European defeat.

Basel’s 4-0 thrashing of Ludogorets Razgrad leaves them in pole position to join Madrid in the last 16.

Liverpool and Ludogorets trail the Swiss champions by three points and will face off in Bulgaria next time out while Basel host Madrid in Switzerland.

“We’re disappointed with the result after an excellent performance,” said Rodgers, who dismissed criticism of his team selection.

“We defended very well when we had to against the best team in the world at the minute, who have been scoring five and six goals a game.

“I thought we were very unfortunate not to get something from the game. You see many teams come here and the game is over after 20 minutes. For our attitude and courage to play I thought we could have got at least a draw.”

Madrid coach Carlo Ancelotti, meanwhile, was happy to see his side seal their passage into the last 16 despite not sparkling as they have done recently on a 12-game winning streak.

“I think we played well, albeit the tempo wasn’t that high,” he said.

“We scored in the first half and then we controlled the game without taking too many risks.”

Cristino Ronaldo was looking for his 71st Champions League goal to match the all-time competition record held by Real legend Raul, but the Portuguese endured a frustrating night as he was denied on several occasions by Liverpool ‘keeper Simon Mignolet.

The Belgian international was called into action as early as the third minute as he flew to his left to deny James Rodriguez before turning a fierce drive from Ronaldo over for a corner.

Even without the presence of Gerrard, Jordan Henderson and Raheem Sterling, Liverpool were still enjoying plenty of possession in the early stages, but lacked penetration as a couple of promising breaks from Lazar Markovic were easily snuffed out.

Madrid eventually found a way through on 27 minutes when Isco fed Marcelo down the left and the Brazilian’s inviting low cross was turned in at the far post by the sliding Benzema.

– No record for Ronaldo –

Mignolet was called into action again to limit the damage for Rodgers’s men before half-time as he palmed away a swerving Ronaldo free-kick and a volleyed effort from Marcelo.

Ronaldo’s search for the record-equalling goal continued after the break, but the man who has 22 goals to his name this season ws suffering an uncharacteristic off-night as he fired another decent opening straight at Mignolet.

Liverpool then posed their first serious threat when Adam Lallana spun on the edge of the Madrid box and sent a low left-footed effort inches beyond the far post before Fabio Borini’s deflected free-kick also drifted just wide.

Gareth Bale made his return after five games out with a pelvic muscle injury as he replaced Rodriguez on the hour mark, while Rodgers played his trump cards as Gerrard and Sterling were introduced at the expense of Lucas Leiva and Markovic.

It was Bale who made the most significant impact, though, when he turned another fine cross from Marcelo onto the bar 19 minutes from time.

The Welshman’s next opportunity came from a free-kick after he had been chopped down by Alberto Moreno, but again Mignolet was equal to his dipping effort.