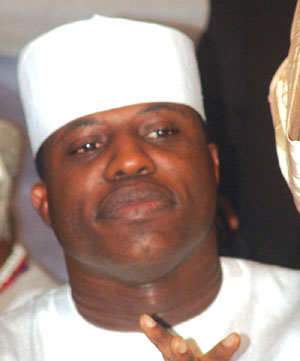 Engr Bayo Dayo, Ogun state chairman of the Peoples Democratic Party (PDP) has insinuated that former Speaker of the House of Representatives, Dimeji Bankole and Senior Special Assistant to the President on Public Affairs, Doyin Okupe are causing discord in Ogun PDP.

In a statement issued and signed by the state Publicity Secretary, Waliu Oladipupo, the state executive said it was not only elected through a valid process but was also validated through court processes.

The party however added that he will not rest on its oars to institute litigation against anyone planning to hijack the party structure through a backdoor approach.

“The attention of the Ogun State chapter of the Peoples Democratic Party (PDP) has been drawn to the rumour making the rounds that the State Executive Committee (Exco) of the party has been dissolved.

“We wish to state without mincing words that nothing could be farther from the truth. The Engr. Adebayo Dayo-led State Exco is intact. As we have said severally, the Ogun State PDP Exco is peculiar.

“The Ogun State PDP Excos, from the ward to local government and state levels were not just elected at validly conducted congresses; they were refined through the crucibles of the party constitution and the laws of land,

“Therefore, given the peculiar circumstances of their emergence, any attempt to tinker with the party structures will not just be an invitation to avoidable lawlessness but also illegal, ultra vires and a direct affront on the judiciary.

“As active participants in the struggle for the rejuvenation and rebuilding of the party in Ogun State, we are aware that the party structures in Ogun State, from the ward, local government and state levels, were put in place by party members while the likes of Doyin Okupe and Dimeji Bankole abandoned the party and stayed away from its activities.

“When disputes arose with the ex-President Olusegun Obasanjo group over the structure, rather than resort to lawlessness, contending interests approached the courts for the resolution of the disputes. Various courts, from Ilaro to Lagos and Abuja, and even the Independent National Electoral Commission (INEC) have since recognised the party structure in the state under the Chairmanship of Engr. Adebayo Dayo – in strict compliance with several judgments validating the structure.

“It is hoped that those who angling to sow the seeds of discord know the implications of their contrived plot. If they think that they can ride on the back of one powerful man at the national headquarters to trample on the rule of law, we wish to serve them notice that we are ready for them. The Ogun State PDP is a veteran of many political battles. We are not resting on our oars. For us, eternal vigilance is truly the price of freedom,” the statement reads in part.

In a similar vein, member of the National Working Committee, NWC and the National Auditor of the Party, PDP, Alhaji Adewale Adeyanju has denied that the party executive committee has been dissolved.

Adeanju, while speaking to PM News via telephone declared that no one can dissolve the executive in Ogun State, adding that, “doing so will amount to contempt of court.”

He explained that the rumour of the exco dissolution was coming from people who are interested in causing confusion in the party through a backdoor approach.

According to Adeyanju, a former staff of FUNAAB, “That is still a rumour because we are all in our villages today and no meetings were held. It is only a rumour and in any case, nobody can dissolve Ogun Exco, it will be a contempt of the court. The court has ruled, the exco will be in place till 2016, the judgement is with the Chairman of the party,” he said.

“Some people who are nothing will want to call themselves something and that is the problem. But I want to say that it is a party affair and one thing peculiar about PDP is that it the party of everybody and not some people. We held the congresses and everyone was there but those people who are not favoured will want to raise issues. People obtained forms from Abuja and some from the state secretariat, all of these were collated and we held the congress.

“There is no issue with staying away from the congress. If there are fights, we fight it within,” he disclosed.