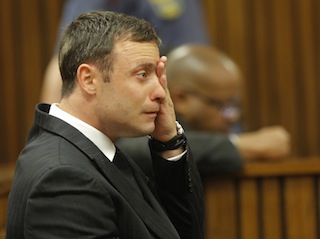 South African prosecutors on Tuesday filed an appeal against the sentence and conviction of star Paralympian Oscar Pistorius, who last month was sentenced to five years for the culpable homicide of his girlfriend.

“Today, we announce that the NPA filed the application for leave to appeal both the conviction and sentence,” the National Prosecuting Authority said in a statement. “The appeal on conviction is based on the question of law.”

The athlete stood trial for killing his girlfriend Reeva Steenkamp, whom he shot four times through a locked toilet door in the early hours of Valentine’s Day in 2013.

Pistorius admitted to shooting Steenkamp, 29, at his upmarket Pretoria home, but told the court that he had mistaken her for an intruder.

The state sought to prove that Pistorius deliberately shot Steenkamp.

But Pretoria High Court Judge Thokozile Masipa found there was not enough evidence to convict the 27-year-old Paralympic and Olympic athlete of premeditated murder.

He was found guilty of culpable homicide, a charge equivalent to manslaughter, after a seven-month trial.

The date for the appeal hearing has not been set.

Pistorius is currently serving his sentence at a hospital section of a Pretoria prison.

The appeal sets the stage for another instalment of a legal battle that has gripped millions around the world.