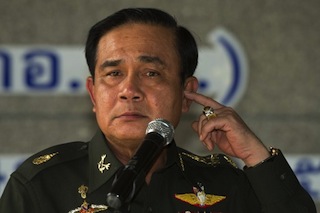 Thai authorities have distributed hundreds of assault rifles to village volunteers in the insurgency-battered south, in a move seemingly at odds with a pledge to find peace to a decade-long conflict within a year.

Violence in Thailand’s Muslim-majority south has left thousands dead — the majority civilians — since 2004 across the southernmost provinces of Pattani, Narathiwat and Yala, which were annexed more than a century ago by Thailand.

In response to a recent slew of shootings and bomb attacks on civilian “soft” targets, Thailand has vowed to protect locals while it seeks a firm date for a fresh round of peace talks with the publicity-shy but ruthless rebels.

Some 2,700 Heckler & Koch HK33 assault rifles have been distributed over the past two months to volunteers in the region, according to a spokesman for the Internal Operations Security Command (ISOC).

“They are for security volunteers… who are stationed at provincial halls, district offices. They will also protect governors and district chiefs,” he said, adding the majority of the weapons have gone to local Muslim villagers.

Authorities have doled out weapons before to Buddhist and Muslim villagers to protect remote hamlets from near-daily shootings.

But rights groups have expressed fears that arming local volunteers promotes vigilantism in a region already scored by violence, suspicion and impunity for civilian deaths.

Several rounds of peace talks with some rebel groups came unstuck during the wider political crisis in Bangkok, which resulted in a May coup.

The ruling junta has since loudly trailed its efforts to reboot the talks, which will be facilitated by neighbouring Malaysia, where many of the rebel leaders are believed to be holed-up.

But a source close to the peace talks told AFP that the timeline is unrealistic, with rebels still irked by Thailand’s failure to respond to five demands they laid out in the last round of discussions — including for a level of political and cultural autonomy as well as an amnesty.

While several rebel leaders are ready to re-engage with Thailand “this time around they might go at a slower pace”.

“Besides the current Thai government is temporary therefore nothing can be achieved in one year,” the source added, requesting anonymity.

Antipathy to the Thai state runs deep in the culturally distinct deep south, with rights groups and activists accusing Thai security forces of severe rights abuses — including killings of civilians since May’s coup.

Locals also accuse Thailand of railroading their culture and in so doing galvanising support for the rebellion.