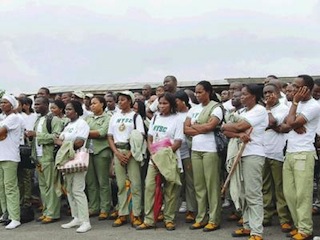 No fewer than 10 university graduates travelling to Bayelsa state from Lagos and Ibadan, Oyo state were Tuesday night involved in a multiple motor accident along Ore-Benin highway, between Okada and Ogbemudia farm.

The students who were going for orientation ‎for the Batch C of the National Youth Service Corps, in Kaiama, Bayelsa state were travelling in a 15-seater Cross Country bus.

It was gathered that the bus, apparently on top speed, rammed into a moving articulated truck in front of it, while the bus behind it (Agofure Motors) also rammed into the Cross Country bus.

Six of the Corps members were reported to have sustained varying degrees of injuries and were immediately rushed to the University of Benin Teaching Hospital (UBTH), where they are currently receiving medical attention.

As at the time of filling this report, authorities of the Orientation camp of the NYSC in Bayelsa state had been notified of the incident.