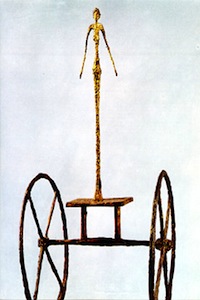 The sculpture, “Chariot,” is one of the seminal achievements of modern art and Sotheby’s had valued it at more than $100 million.

Selling for $100.97 million, it depicts a goddess frozen in motion and was considered a beacon of hope for the post-World War generation.

The identity of the buyer was not immediately known. The sculpture has been in the same private collection for four decades.

“Chariot” was the most expensive valued lot in a week of auctions at Sotheby’s and rival Christie’s, which began Tuesday and last until November 12.

Also on Tuesday, Amedeo Modigliani’s small sculpture “Tete” smashed pre-sale expectations by selling for $70.7 million. Sotheby’s said the price was an auction record for the artist.

Dating from 1911-12, it is one in a series of rare sculptures carved from blocks of stone scavenged from construction sites across Paris.

It had been valued at $45 million.

“The market is rediscovering sculpture and they are now among the most desirable works of art,” said Simon Shaw, Sotheby’s co-head of impressionist and modern art.

A third highlight of Sotheby’s sale was Vincent van Gogh’s “Still Life, Vase with Daisies and Poppies,” which fetched $61.77 million, surpassing its pre-sale estimate of $30-50 million.

The artist painted it three months before his death.

Christie’s and Sotheby’s are auctioning around $1.7 billion worth of impressionist and modern, post-war and contemporary art over the next week.

The world record for the most expensive piece of art sold at auction was a Francis Bacon triptych — “Three Studies of Lucian Freud” — which sold for $142.4 million at Christie’s last year.