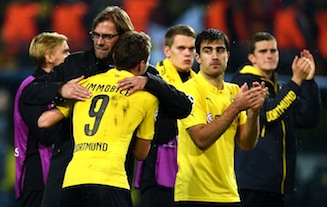 Borussia Dortmund brushed off their nightmare Bundesliga form to maintain their perfect Champions League record and book their place in the knockout phase with Tuesday’s 4-1 rout of Galatasaray.

Dortmund are second from bottom of the German top flight following the worst start to a season in the club’s history and have lost their last five matches in a row, but are one of the first teams into the last 16 in Europe’s elite club competition.

Borussia remain top of Group D with four wins from four and posted another convincing victory against Cesare Prandelli’s Galatasaray having won 4-0 in Istanbul a fortnight ago.

Arsenal’s 3-3 draw at home to Anderlecht leaves Dortmund five points clear of the Gunners atop the table and odds-on to finish as group winners.

“That was very disciplined, the team had things under control from the first minute,” said Dortmund coach Jurgen Klopp.

“We defended well and, when our tactical measures didn’t quite work, we compensated with passion and scored some great goals.”

Bizarrely, Dortmund have now picked up nearly double the points, 12, in their four Champions League matches than the seven they have from their 10 Bundesliga matches.

The game was held up twice in the second half by crowd trouble as Galatasaray fans threw fireworks onto the pitch, then set off a flare in the stands in the closing few minutes.

“Everything was done in terms of security, but they still get this stuff through. It’s remarkable. I hope it calms down,” fumed Klopp.

Goals either side of half-time from Marco Reus and Greece defender Sokratis Papastathopoulos put 2013 Champions League finalists Dortmund on their way to the knockout phase.

Galatasaray’s Berlin-born defender Hakan Balta pulled one back for the visitors midway through the second half before the hosts scored twice more to put the result beyond doubt.

Italy striker Ciro Immobile netted Dortmund’s third just three minutes and 26 seconds after coming off the bench to calm the hosts’ nerves after a period of sustained Galatasaray pressure.

Immobile then compounded Galatasaray’s misery when his cross was deflected into the back of the Turkish giants’ net by defender Semih Kaya.

Reus put Dortmund ahead when right-back Lukasz Piszczek spotted the Germany winger’s run and put in a brilliant through ball. Reus needed no second invitation to get behind the Galatasaray defence and strike on 39 minutes.

Dortmund doubled their lead when midfielder Sebastian Kehl rose highest to a corner and headed down for Greek centre-back Sokratis, the 26-year-old scoring his first Champions League goal with a half-volley from inside the six-yard box on 56 minutes.

Balta put Galatasaray back in the match with a thumping header at the near post after a Wesley Sneijder corner on 70 minutes.

But Reus made way for Immobile and the Italian quickly claimed his third Champions League goal in three games.

Galatasaray’s brief period of pressure came to nothing as Immobile finished off a flowing move by Henrikh Mkhitaryan and Pierre-Emerick Aubameyang.

The Italian got the ball in the net despite being fouled by Galatasaray goalkeeper Fernando Muslera on 74 minutes.

Aubameyang then squandered two chances to add to the goal tally before Immobile struck again. Kaya could only watch in horror as Immobile’s pass clipped his boot and spun into the net with five minutes left.

The result leaves Galatasaray bottom of the table with one point.