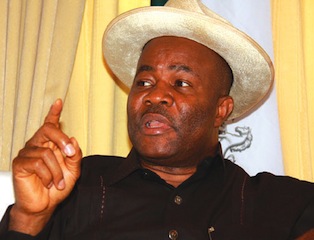 The National Council of State on Tuesday expressed satisfaction with the ongoing efforts of the nation’s security agents toward combating insurgency and terrorism across the country.

Governor Godswill Akpabio of Akwa Ibom made the position of the council known to State House correspondents after its meeting which was presided over by President Goodluck Jonathan in the Presidential Villa, Abuja.

He said the council was briefed by the National Security Adviser, Col. Sambo Dasuki (Rtd.), on the current war on insurgency and explanations were given on the issue of the abducted Chibok girls.

“He briefed council on the current war on insurgency and explanations were given on issue of Chibok girls.

“Council was satisfied that the Defence ministry and all the agencies have taken the right steps and the President is on course and we are very hopeful that sooner or later Nigerians will hear good news.

“But we urge Nigerians to be patient, that the issues of terrorism are not issues that could be finished within a day of two.”

According to him, the council commends the President and security agencies for a job well done so far and urges them to add more valve to ensure that lives and property are protected.

The governor further stated that President Jonathan would do everything possible to ensure the release of the Chibok girls.

“We also recognised that Police alone won’t be able to secure lives and property. They will need the cooperation and collaboration of every Nigerian and when it comes to the issues of security all of us should be seen as activists.

“We also agreed to do whatever we can to support the police to provide some resources to complement federal effort to see that the police have all that they need to ensure effective policing of the Nigeria State, so that they can guarantee and ensure protection of lives and property.

“More so that we are approaching elections and naturally this is the peak of political activities and there are security issues that are associated with politicking and electioneering.

“We all agreed that everything must be done to ensure that in this season everybody plays according to the rules and that the police do their job dispassionately so that Nigerians can look forward to the elections without fear,” he added.

Gov. Adams Oshiomhole of Edo, who also spoke on the outcome of the meeting, said the council confirmed the appointment of Suleiman Abba as substantive Inspector-General of Police because of his good credentials.

He, however, advised the I-G to always be fair and just while performing his responsibilities.

“And the fact that he has been confirmed does mean if he doesn’t play according to the rules I have not forfeited my right to revise my position.

“So for now we are unanimous that based on his pedigree that Malam Abba has what it takes to reposition the police,” he said

In a brief interaction with State House correspondents, Abba said his confirmation was comforting but “comes with huge responsibility”.

“I must tell you this is a happy moment but is also a moment of sober reflection. Reflection on the responsibilities, on expectations; certainly I have to work hard to ensure that I meet up with the expectations of the office.

“Truly Nigerians and in fact all people in Nigeria deserve the best from us so that we make the environment safer and secure.

“I assure you, having reflected on all these we will ensure that we manage all the resources in the charge of the Nigerian police to ensure they are used judiciously for the safety and security of Nigeria.”