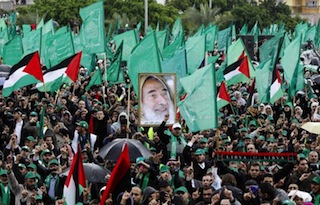 Palestinian militant group Hamas hailed Wednesday’s deadly car attack in Jerusalem by one of its members, calling it “the natural response to the crimes of the (Israeli) occupation”.

Akari, whom police identified as a 38-year-old Palestinian from east Jerusalem’s Shuafat refugee camp, hit two groups of pedestrians before getting out of the vehicle and attacking passers-by with an iron bar.

Police then shot him dead.

Hamas said Akari was the brother of a man released from an Israeli prison as part of a 2011 swap for Israeli soldier Gilad Shalit.

Shaludi, who was from east Jerusalem’s Silwan neighbourhood, killed two people with his car on October 22 near the site of Wednesday’s attack and was fatally shot by police at the scene.

A week later Hijazi, also from east Jerusalem, allegedly shot and wounded an ultranationalist Israeli rabbi in a murder attempt.

He was shot dead early the next morning by police who raided his home.

Hamas spokesman Sami Abu Zuhri told AFP on Wednesday that Akari had acted in a “natural response to the crimes of the (Israeli) occupation against Al-Aqsa mosque and occupied Jerusalem.”

He called for “all Palestinians to use all means to oppose the crimes of the occupiers against Al-Aqsa.”

The Islamic Jihad militant group issues a statement of its own “saluting the operation in Jerusalem” and adding that “the battle against the enemy continues.”