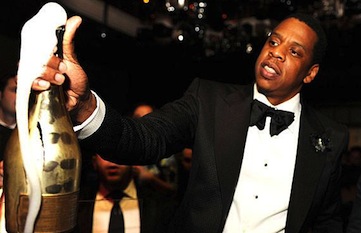 Hip-hop mogul Jay Z has shown his fondness for Armand de Brignac Champagne for years and on Wednesday he bought the brand.

Sovereign Brands, a New York-based wine and spirits company which owned the label, said it was selling it to Jay Z for an undisclosed amount.

Armand de Brignac is produced by a staff of eight people at the Cattier family house in the French town of Chigny-les-Roses, with the golden bottles bearing an ace-of-spades insignia.

While the winemaking house was established in 1763, the Armand de Brignac line was launched just in 2006 — the year it was discovered by Jay Z who featured the champagne in his video for “Show Me What You Got.”

Yvonne Lardner, a spokeswoman for Sovereign Brands, said that the company has had a “wonderful relationship” with Jay Z.

“He became interested in owning the brand and made us an offer we simply couldn’t refuse,” she said.

“To establish an iconic, credible high-end champagne in such a short period of time is something truly remarkable,” she said.

In one high-profile incident, Jay Z brought out a display of 350 bottles of Armand de Brignac in 2012 when he and his wife Beyonce threw a fund-raising party for President Barack Obama at a New York nightclub.

The giant presentation was quickly covered up, with Obama’s re-election campaign presumably concerned about the optics of appearing around $300-a-bottle champagne bottles.

The acquisition is the latest business venture for Jay Z, whose original name is Shawn Carter. His past transactions have included a stake that he later sold in the Barclays Center arena in Brooklyn.

Forbes magazine has estimated Jay Z’s net worth at $520 million. The magazine said this week that Beyonce was the highest-earning woman in music last year, raking in $115 million.

Jay Z and other rappers have frequently extolled the joys of champagne. Jay-Z’s song “Young Forever” envisioned a time in which “you never get old and the champagne’s always cold.”

But hip-hop’s relationship with champagne has not been without difficulty. Louis Roederer’s Cristal brand had been a favorite among hip-hop artists, but Jay Z in 2006 called a boycott over comments by an executive he saw as racist.

The executive, who was commenting on hip-hop’s association with champagne, denied the charges.