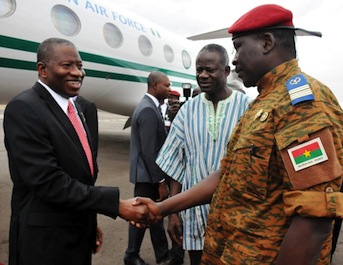 President Goodluck Jonathan has arrived in Ouagadougou, the capital of Burkina Faso, for talks aimed at quickening the resolution of the current political crisis in that country.

Jonathan is joined by Presidents Macky Sall of Senegal and John Mahama of Ghana.

Mahama is the Chairman of the Economic Community of West African States (ECOWAS) Authority of Heads of State and Government.

The three leaders are members of a delegation of Heads of State and Government raised by ECOWAS to intervene in the crisis in which Blaise Compaore resigned as Burkina Faso President on Friday.

Jonathan, who arrived at the Presidential Wing of the Ouagadougou International Airport at 9.50 a.m. local time was received by the country’s interim Head of State, Lt-Col. Isaac Zida.

He is accompanied by Mr Nurudeen Mohammed, the Minister of State II for Foreign Affairs and some principal aides.

Also at the airport to receive Jonathan was the Nigerian Ambassador to Burkina Faso, Mr David Bala, and other officials of the Embassy.

The visiting Heads of State are billed to hold talks with Zida, opposition leaders, members of civil society organisations and other political stakeholders in Burkina Faso.

As at the time of filing this report, Jonathan, Sall and Mahama were holding preliminary discussions behind closed doors at the Libya Hotels, venue of the mediation talks.

They will later meet with other parties involved in the crisis.

The News Agency of Nigeria (NAN) recalls that Compaore resigned and fled to Ivory Coast on Friday following mass protest in Ouagadougou.

The protest was triggered by Compaore’s plan to amend the Constitution of Burkina Faso
to pave way for him to contest for the Presidency again in next year’s elections after 27 years in power.

On Saturday, the military seized power and named Zida, who was second in command of the Presidential Guard, as the new interim leader.

Although the military said a civilian-led transitional government would be established as soon as possible, opposition leaders were demanding immediate establishment of civilian transition government.

Meanwhile, normalcy had returned to Ouagadougou, as most businesses were open on Wednesday, although a 12 midnight to 5 a.m. curfew was still in force in the city.