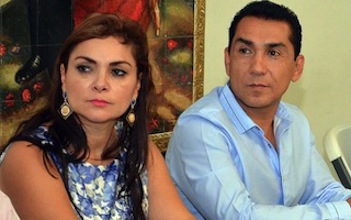 Mexican police on Tuesday detained a fugitive ex-mayor and his wife accused of ordering a deadly police attack that left 43 students missing, raising hopes of a break in a case bedeviling the nation.

Jose Luis Abarca, the former mayor of the southern city of Iguala, and Maria de los Angeles Pineda were captured by federal officers in the dead of night in Mexico City’s populous working-class district of Iztapalapa, authorities said.

Officials hope the arrest will yield new clues about the whereabouts of the students in a disappearance that has drawn international condemnation, sparked national protests and shaken President Enrique Pena Nieto’s administration.

After more than a month on the run, the two were interrogated by federal prosecutors. Relatives of victims later entered the attorney general’s office while some 30 people protested outside.

“I hope that this arrest will contribute in a decisive manner … to the investigation undertaken by the attorney general’s office,” said Pena Nieto, who last week met parents angry at the pace of the probe.

The couple had been hiding in a small, cement-colored house with a dusty courtyard, far from their opulent life in Iguala, where Abarca owned jewelry stores and his wife allegedly ran local operations for the Guerreros Unidos drug gang.

Attorney General Jesus Murillo Karam said Abarca and his wife were captured “without a single shot fired” at 2:30 am in one of three homes that were put under secret surveillance following intelligence work.

Police also detained a woman identified as Noemi Berumen Rodriguez in another part of Iztapalapa over accusations that she helped them hide.

A neighbor said the house used to be owned by an elderly couple who died months ago. Others saw a woman go in and out periodically.

“I never saw them,” said Alberto Neftali, who has lived across from the street for decades.

Authorities say the students vanished on September 26 after municipal police shot at their buses in the city of Iguala, 200 kilometers (125 miles) south of Mexico City, and then handed the 43 to the Guerreros Unidos.

Six people died in the night of violence. In one gangland-style killing, a dead student was found with his facial skin peeled off and eyes gouged out.

The teacher-college students remain missing despite a vast search operation by troops, drones and boats in the state of Guerrero, where a dozen mass graves containing 38 unidentified bodies have been discovered.

Guerrero’s interim governor, Rogelio Ortega, whose predecessor Angel Aguirre resigned over the case, told the Televisa network that the capture could lead to “substantial leads” in the search.

Manuel Martinez, a spokesman for the families of the missing, told AFP that investigators must make Abarca speak because he “knows where they are.”

Authorities say Abarca ordered the officers to confront the students over fears they would derail a speech by his wife, who headed the local child protection agency.

Students from the left-wing college near the Guerrero capital Chilpancingo said they went to Iguala to raise funds but acknowledged they had seized the buses to transport themselves.

Dubbed the “imperial couple,” the mayor and his wife have since been linked to the Guerreros Unidos. Pineda also has three brothers who have worked for the Beltran Leyva drug cartel.

Abarca’s family says he is innocent.

Elected in 2012, Abarca remained in power despite accusations by members of his own leftist Democratic Revolution Party that he murdered a farm activist last year.

Prosecutors have said they never had enough evidence to charge him for the murder, which Abarca denied.

The mass disappearance has overshadowed Pena Nieto’s attempts to steer Mexico’s narrative away from the drug war and toward economic reforms that have drawn international praise.

Authorities have now detained 59 people, including 22 Iguala police officers and 14 members of the municipal force in the neighboring town of Cocula.

Suspects have led investigators to several mass graves, but DNA tests have shown so far that the students are not among the remains.

Mexicans have held a series of protests over the disappearance. Some have turned violent, with demonstrators torching part of the Guerrero government headquarters last month.