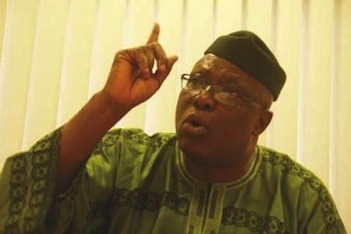 Senators elected on the platform of All Progressives Congress (APC) have alerted Nigerians that their counterparts in the Peoples’ Democratic Party (PDP) have crippled activities in the Upper Legislative Chamber over personal interests which are of no benefit to the overall well-being of the nation.

The opposition senators accused their PDP counterparts of not allowing the Senate to sit for two days in a row, adding that, the House adjourned as soon as it convened on Tuesday 4th November 2014, and indefinitely adjourned on Wednesday, 5th November 2014, without any deliberation.

A statement by the APC Caucus in the Senate signed by its spokesperson, Senator Babafemi Ojudu, attributed what it termed the PDP senators’ insensitivity to issues of national interests to a running battle that they are having with their state governors over the handing over of the party structure to the latter which they believe will hamper their re-election to the Senate.

“While we are in sympathy with our colleagues for their fate in the hand of President Jonathan and the governors in their respective states, we the APC Senate Caucus, however, condemn the habit of prioritizing personal interests over national interests at the expense of the people that they swore to protect.

“We had planned today (Tuesday) to raise the issues of insecurity to Nigerians and the trend of insecurity in Nigeria. Mubi, which is the second largest town in Adamawa State, has been overrun by terrorists. Nigerians in that area are fleeing their homes, afraid and uncertain of the preservation of their lives.
Emirs are being driven from their palaces.

“A foremost cement factory in Gombe, Ashaka Cement Factory, has been taken over by Boko Haram according to news reports. Many may not believe the alarm raised by the Deputy Governor of Borno State, Zanna Mustapha, that it is just a matter of weeks before Boko Haram takes over the whole state, but the reality is even scarier than this. Unfortunately, our brothers and sisters in the PDP do not see it this way.

They rather prefer to bicker over party nomination and return ticket,” the APC Caucus said.

It added that it is, however, shocking that the PDP is selling Nigeria and Nigerians short for party nomination in spite of all the gory episodes that the country is currently going through.

The APC Caucus said it had planned to use Wednesday’s sitting to call for a resolution compelling President Jonathan to, as a matter of urgency, protect the territorial integrity of Nigeria, adding that the plan could not sail through because senators elected on the platform of the president’s party did not allow the Senate to sit.

“It is rather unfortunate that we are busy chasing rats while our roof is burning. The senators elected on the platform of APC wish to let Nigerians know that we are ready to work, but our PDP counterparts are arm-twisting us because they are in the majority.

While the majority will have its way, the minority to which we belong must have its say. This is why Nigerians should prevail on PDP senators to do what they are paid for instead of fighting to secure their future in the Senate while the future of Nigeria looks bleak,” the statement concludes.