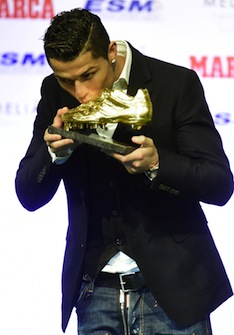 World Player of the Year Cristiano Ronaldo believes he will be considered one of the greatest footballers to have ever played the game by the time he retires.

The 29-year-old picked up the third Golden Boot award of his career for being joint top-goalscorer in Europe last season in Madrid on Wednesday and is also the odds-on favourite to win the Ballon d’Or for a third time in January.

And, while insisting he still has plenty of years at the top left in him, the Portuguese is confident his place amongst the greats in the history of the game is assured.

“I always want to be the best, that is what I work towards every day,” he said.

“I respect what people think and I am making my own story bit by bit. I still have a long way to go and when I finish my career I can look at my stats to see if I am amongst the best in history. I am sure I will be.”

Ronaldo was hailed by Real Madrid president Florentino Perez as the “dignified heir to Alfredo di Stefano”, the club legend and former honorary president, who passed away earlier this year.

And Ronaldo refused to rule out extending his stay in the Spanish capital beyond his current deal, which expires in 2018.

“What I like most is winning. I hope to see out my contract with Real Madrid until I am 33 and we’ll see if I can stay on for a few more years or not.”

Ronaldo’s blistering form has continued this season with 22 goals in 16 games to propel the European champions to the top of La Liga and into the last 16 of the Champions League once more.

However, he warned against lauding the current squad as one of the greatest in the club’s history at such an early point in the season.

“Everyone is saying this could be the best squad Real Madrid has ever had, but we will see that at the end of the season. If we don’t win anything we won’t be.

“The team is playing well, we have a new system and the coach knows what he is doing.

“At an individual level things are going well. I’ve scored a few goals recently and I am in good form. I hope it continues like this until the end of the season.

“We have (Gareth) Bale back now from injury and he is fine, so we can go far. We have to work to improve and we will try to win the important titles which are the league, the Champions League and the Copa del Rey.”