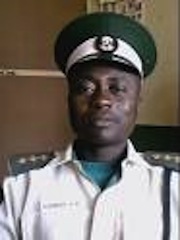 Two persons were early this morning severely injured in an accident that occured along Abeokuta-Lagos expressway of Sango area in Ado-Odo/Ota local government council.

Narrating the incident to PM News this morning, the Commander of the State Traffic Compliance, TRACE, Ado-Odo zonal Command, Kunle Ajibade disclosed that the road users plying the route should bear TRACE and the state government because the accident has caused serious gridlock along the expressway, forcing motorists to use one lane.

The first accident involved two trucks with one of them fully loaded with gravel which spilled over the road and as at te time of filling this report, TRACE officials were trying to clear the road of the gravel and the truck as well as conduct the flow of traffic.

The vehicles involved in the crash had license registration numbers SMK 10 XM and XE 134 AAB.

Both vehicles, our correspondent gathered were coming from Sango axis and heading towards Abeokuta before the incident occured around 6:00 a.m. which resulted in the two trucks falling on the road with both drivers seriously injured.

The other incident which was a lone accident occured on the main bridge in Sango where a Lagos metro luxurious bus, LAGBUS hit the median and caused another traffic jam along the end of the road.

The registration number of the bus is AAA 312 XB and as at the time of filling this report, the combined team of TRACE led by Comdr.Kunle Ajibade and some members of the LAGBUS team who had arrived the scene with their toll truck were trying to evacuate the accident bus off the road.

It was gathered that the accident was caused as a result of brake failure at about 5:30 a.m. today.

Commenting on the two accidents, Ajibade advised that motorists and other road users to be cautious, especially with the rain which makes the visibility of the weather poor.

He further warned that drivers should desist from driving against the traffic and also enjoined motorists to obey all the traffic rules.

According to him, “we thank God that there are no casualties. I want to appeal to all motorists, especially the commercial bus drivers to park appropriately around the toll gate because construction work is ongoing along Ilo-Awela road in Ota.

As at the time of filling this report, the road is yet to be cleared but men of the TRACE agency and other security agencies were seen directing the gridlock which has gradually extending to Iyana Ilogbo area of the state.