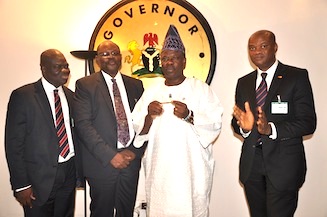 Governor Ibikunle Amosun of Ogun state, southwest, Nigeria has called on residents of the state to come out massively to collect their permanent voter cards (PVC).

The governor also urged the Independent National Electoral Commission (INEC) to make the distribution exercise which will hold between 7 and 9 November 2014 seamless without causing any form of inconvenience for the electorate.

“I want you to do your best to ensure every electorate gets his card while new ones are registered accordingly.”

The governor, who made this call at the Independent National Electoral Commission (INEC) stakeholders interactive meeting on the distribution of permanent voter cards (PVC) and continuous voters registration (CVR), held in Abeokuta, underscored the importance of the card.

“Without it, we cannot have the opportunity to elect those who will render good services that would bring development.”

Amosun assured that the state government will not shirk in its responsibility of assisting in sensitising the public and providing INEC all the needed support to make the process a success, pleading with the political class, religious and traditional leaders as well as non-governmental organisations (NGO) and media to be involved in the
advocacy as it would help deepen our democracy.”

According to him, “The exercise is not about any party but about our people who desire good governance. Politicians should see that we are brothers and sisters. Hence, we must comport ourselves in a peaceful and orderly manner to show the entire world that we are truly Ogun. We should not engage in any form of violence.

“Whoever wins at the end of the day will not represent his family, but the entire Ogun state. If any nation will have socio-economic advancement, it must have conducive political environment.

“INEC should try as much as possible to make the exercise seamless without causing the electorates any form of inconvenience. I want you to do your best to get the card to everyone during this exercise,” governor said.

While giving assurance of the state government’s readiness on the exercise, Amosun emphasized that, “we as government will not shirk in our responsibility of sensitizing the people,” he posited.

Speaking earlier, the State Resident Electoral Commissioner, Sam Olumekun, revealed that the Commission scheduled the exercise in three phases across the six geo-political zones with Ogun state in the last and third phase, pointing that all voters who have been properly captured on the biometric register of voters compiled in 2011 would be issued permanent voters cards (PVC) in exchange for the temporary cards, insisting that every electorate should come personally to collect the card as it would not be done by proxy.

“For us in Ogun State, there is no basis for anybody to worry as we have concluded arrangements to register citizens in all the 639 polling units,” Ogun REC stated.

Olumekun said,warning against multiple registration which is a punishable electoral offence.

Meanwhile, Governor Amosun has admonished the National Identity Management Commission (NIMC) to sustain the initiative of the new national identity e-card without allowing it to go the usual way.

The governor, who gave this charge when he was presented with his e-card by the leadership of the commission led by the Director-General, Chris Onyemenam, in his Oke-Mosan office, Abeokuta, commended the idea of the multiple application card while he spent some minutes activating it.

“I know the importance of this card. I can only commend your efforts. It will help us in so many areas, including security. It is just my prayer that this will not be another of our programmes that we will not be able to manage and will go the usual way. We should try to sustain it so that it will just be like anywhere in the world such
that without it we can’t do anything,” Amosun advised.