I Want To Become Nigeria's Number One Player ---Udoffa 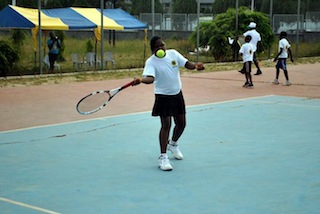 She started her third official tournament on the back of successive losses in previous tournaments and does not seem to be discouraged by her winless run.

8-years old Mary Udoffa from Lokoja has not won any game since she began competitive tennis action, yet she is not giving up on making it big in the sport just yet.

Having watched youngster, MaryLove Edwards on the television on a number of occasions, Udoffa insisted on playing the game and despite her pluppy size, has shown more determination than meets the eyes.

In a chat with P.M.NEWS Sport at the Murtala Square, Kaduna, venue of the ongoing NNPC Junior Circuit, this youngster expressed sheer guts for someone of her age.

She lost her first match at the Circuit the same way she had lost previous matches but she seemed unfazed by the manner off loss.

Asked how many games or tournaments she had won before coming to Kaduna, “they have always given me 9-0 but I am sure that one day I’ll start winning games” was her response.

Udoffa added that, “I love the game and play it passionately but it does not seem to be yielding fruits just yet.

“However, I am optimistic that I will start winning games soon and I shall be able to achieve my dreams of becoming a good tennis player.”

Such is her determination that despite her personal ambition to become a Medical Doctor, Udoffa wants to become a tennis coach in the future.

She does not believe that her weight is a hindrance towards her progress.

“After achieving my aim of becoming a doctor, I will become a tennis coach. But, before all of these, I want to become Nigeria’s number one female player and possibly the best in the world.

“I have worked a lot on my backhand, forehand and my service since I started. I have also shed a lot of weight and I believe strongly that mothing can stop my dreams from coming true,” Udoffa said with great passion.

As the tournament enters its closing stages, Udoffa will work her socks out just to win her first game and make her father’s devotion to her count a lot.

“I have to make my father and coach proud,” she stated.

“They have done a lot for me, especially my dad. The coach has also done a lot of work on me. I want to play like MaryLove Edwards, because she is one of my favourites in the country.

“After that, I can look at my level of progress in the game. I’m simply excited and honoured to be a tennis player,” the Kogi-born player said with a note of finality.