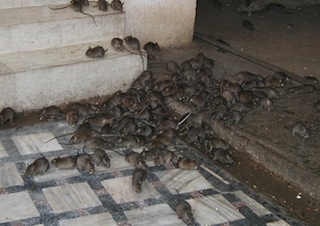 Rats: The harbingers of Lassa Fever

A pest control firm exterminated 4,400 rats over two days at a state-run hospital in India with thousands still on the premises, its chief executive said on Thursday.

According to Sanjay Karmakar, Head of Laxmi Fumigation and Pest Control Service Ltd., said that Maharaja Yeshwantrao in Indore, south of Delhi, was still home to over 10,000 rodents.

However, the complex consists of seven buildings across about 10 acres.

“We have only tackled a part of the grounds so far they are riddled with rodent burrows, at least 1,000 of them.

“Each would have four to eight rodents, we have not started on the buildings yet, the pest control firm is baiting the rodents with different food each day.

“One day, it is peanuts and clarified butter, another day its roasted chickpeas, potato cakes and so on.

“If one of a family dies after eating something, the other rats will not touch the same food, so we have to keep changing the menu,” Karmakar said.

Operation Kayakalp (transformation) began on Oct. 28 and is scheduled to run until 4 Dec.

Karmakar’s company ran a similar operation at the hospital in 1994 soon after an outbreak of pneumonic plague in the neighbouring state of Gujarat.

“We cremated 12,000 rodents at the local electric crematorium in the presence of government officials after Kayakalp I in 1994,” Karmakar said.

However, there was no follow up by the hospital authorities and the rodents multiplied again.

Report says the 950-bed hospital is one of the biggest government-run healthcare facilities in Madhya Pradesh state.

It includes a medical college and is visited by over 1,100 outpatients daily.

Officials said that poor refuse disposal was the main reason for the rat infestation.