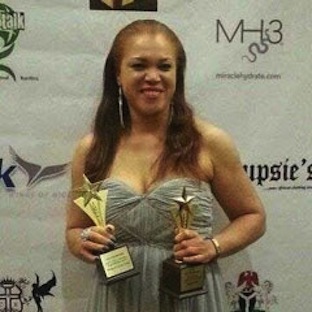 After scooping one award out of five nominations at the just concluded 4th Annual Nollywood African Film Critics’ Awards (NAFCA), Nigerian actress Bridget John has added the Best Actress award for her lead role in the rave-making movie “Adora”.

The latest award was bequeathed on her by Hollywood Magazine at its annual film festival which was held recently in California, USA.

Adora, after being screened to film moguls and critics from different backgrounds, was widely acclaimed, accepted and rated very high in all aspects.

Special praises and accolades went to Bridget John for her master-craft in interpreting the role that she played in the movie.

This outstanding and amazing effort in Adora was recognised, representing another milestone achievement for the ever-innovative actress from Nigeria.

The elated John was short of words on her new feat: “”t has been trails of awards since Adora was first screened at the film festival in USA and now I even feel more humbled with my most recent conquest.”

John promised never to relent on her efforts to position Nigeria high on the global acting stage. “I have come to realise that an actress has to even work harder, preserver and keep doing the good job because diligence always pays. I am also determined like never before to earn more laurels and raise the ante in the pursuit of excellence in the movie industry,” she said.

It would be recalled that the production of a world-class movie, Adora, was not without the normal challenges – hectic and demanding as it gulped considerable time, resources and energy to achieve the flick. Little wonder it is a beehive of success for the movie – Adora with several nominations and strings of top-notch awards from home and abroad.