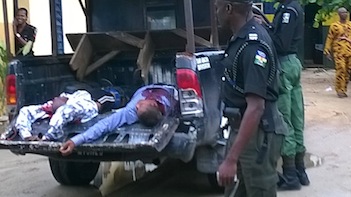 The men shot dead by police

Two persons suspected to be armed robbers who were attempting to rob Eco bank branch by Agip Junction along Ikwerre road in Port Harcourt, Rivers capital were yesterday shot dead by policemen.

The Rivers Police command confirmed the shooting incident but did not give details.

According to eyewitness account, the driver of the vehicle that conveyed the suspected robbers managed to escape when the gang came under fire power from policemen who got intelligence report of the suspected gang of robbers.

The eyewitness could however, not confirm if the men killed were armed robbers.

One of them, a female customer who pleaded anonymity said “all I heard was gunshots. The driver of the red car and the persons killed ran towards the school (Government Girls School,Rumueme) and escaped,one them was shot dead instantly while another one who tried to escape was also shot dead.”

Another said two or one of the suspected robbers escaped while a banker was one of those killed. Attempts to speak bank officials were futile.

A comprehensive detail of the incident is yet to come from the Police command.