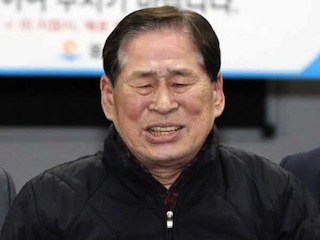 Kim Han-Sik, CEO of Chonghaejin Marine Co. cries as he apologizes to families of the victim and the country

South Korean prosecutors on Thursday demanded a 15-year jail term for the president of the firm which operated the sunken Sewol ferry, holding him partly responsible for the disaster that killed more than 300 people.

Kim Han-Sik, CEO of Chonghaejin Marine Co., is on trial in the southern city of Gwangju on charges of criminal negligence and embezzlement.

“We ask for 15 years in prison for the accused, taking into account the scale of the disaster, his status and responsibility for causing the disaster”, Senior Prosecutor Park Jae-Eok said.

Prosecutors also demanded jail sentences of between four and six years for 10 others on trial alongside Kim on charges of criminal negligence. They included six officials from the company, two from a freight-handling firm and two port management officials at Incheon Port.

The 6,825-tonne Sewol ferry was carrying 476 people — most of them high school students on an organised trip — when it capsized off the southern coast on April 16.

“Chonghaejin executives only pursued commercial gains, ignoring passenger safety… They show little repentance, only seeking to shift the blame to each other”, Park said in court.

Kim, 71, is charged with allowing the ship to be routinely overloaded and its container cargo to be left unsecured to the deck in breach of safety standards.

Kim has denied accountability, saying he had been merely a salaried employee under the thumb of company owner Yoo Byung-Eun, whom Kim said was deeply involved in the hands-on operations of the company.

Kim also faces charges that he had diverted some $2.6 million from Chonghaejin Marine for four years until the disaster struck and funnelled it to Yoo, Yoo’s other companies and Yoo’s family members.

Following the disaster, Yoo became the target of a massive manhunt.

His badly decomposed body was found in June but an autopsy failed to determine the cause of death. Kim insisted he had been unaware that the ship’s balance had been severely compromised as a result of illegal renovations early last year to increase its passenger capacity. He also denied being aware that it had been overloaded.

In a separate trial in the western port of Incheon, Yoo’s eldest son Yoo Dae-Kyun was sentenced Wednesday to three years in prison for embezzlement.

Yoo Dae-Kyun was found guilty of syphoning off some $7.2 million from Chonghaejin Marine and its six sister companies between 2002 and late last year.

Last month, prosecutors demanded the death penalty for the ferry’s captain Lee Joon-Seok, branding him an unrepentant liar who abandoned the more than 300 people who died in the disaster.