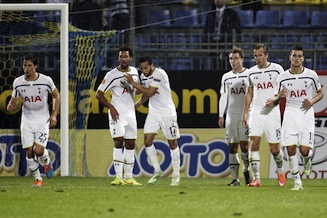 In-form Harry Kane helped Tottenham to victory in the Europa League on Thursday as Celtic and Inter Milan had to settle for draws.

After a taxing week for some of their Premier League rivals in the Champions League, Spurs survived a poor second half display to run out 2-1 winners at Greek side Asteras Tripolis.

Andros Townsend’s penalty and Kane’s quick second goal set the north Londoners up nicely, however Asteras pulled one back via a last minute penalty after Federico Fazio’s red card.

There may have been no repeat of Spurs’ 5-1 rout in which Kane got a hat-trick and Erik Lamela produced his ‘rabona’ goal against the Greeks in London last month.

But in the end it was job done to stretch Tottenham’s unbeaten run in the competition to four.

Townsend got them under way from the penalty spot in the 36th minute, dusting himself down after being sent clattering to the ground by Khalifa Sankare to rifle the spot kick into the corner of keeper Tomas Kosciky’s net.

Six minutes later Townsend turned provider, his lobbed cross headed home by Kane for his 10th goal of the season.

Asteras made Spurs sweat, though, when Jeronimo Barrales converted the 90th minute penalty awarded after Fazio was sent off for an ill judged tackle.

The win was a welcome upturn in Premier league club’s fortunes in Europe after losses for Liverpool and Manchester City and stalemates for Chelsea and Arsenal.

Spurs are level with Besiktas on eight points in Group C and on their way to the knockout stages with two games remaining.

Celtic’s Group D game against Astra Giurgui in Romania was played out in thick fog.

The Scottish champions were fired into the lead by Stefan Johansen only for Brazilian substitute William Amorim to level with a brilliant curling shot to beat Celtic keeper Craig Gordon.

While a win would have seen them safely through to the next round, the draw left them second on eight points, two adrift of Salzburg, 5-2 winners at Dinamo Zagreb.

Italy’s last Champions League winners in 2010 took the lead through Brazilian Dodo, only for Moustapha Bayal Sall to equalise for the former French greats in the second half.

In Group E, Dynamo Moscow beat Portuguese visitors Estoril 1-0 to make it four wins out of four and see them safely into the next round, Germany forward Kevin Kuranyi bagging the decisive goal deep in the second half.

In Group A, Borussia Moenchengladbach lead by a point after beating Apollon Limassol 2-0, while Dutch giants PSV Eindhoven saw off Panathinaikos 3-2 in Greece.