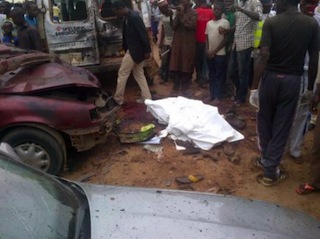 A bomb concealed in a black plastic bag killed several people at a First Bank cash point in Azare, Bauchi state today, close
to the scene of a recent bus station attack blamed on Boko Haram.

Multiple residents of the targeted town of Azare said that the bomber approached people who had queued up outside a First Bank branch at roughly 10:30 am (0930 GMT).

“A man came on foot to this ATM where a large crowd was taking turns to withdraw money,” said Lamara Ibrahim, who was at the scene.

The man tried to leave a black plastic bag on a parked motorcycle nearby but was stopped before he could leave by locals who said leaving parcels unaccompanied was prohibited following recent unrest in the area.

“It was while they were talking to him that the bomb exploded. I saw at least 10 people that looked dead,” said Ibrahim, noting that he was not in a position to authoritatively confirm a death toll.

Musa Usman, who was also nearby, gave an identical account of the attack and estimated that several people were killed.

A bomb blast at a bus station in Azare killed at least five people on October 23, with many in the city pointing the finger at Boko Haram, which is waging a five-year uprising against the Nigerian state.

An official at the depot, who asked to remain anonymous, said he rushed down the road after hearing a “huge blast” and helped evacuate the victims from the scene to a hospital.

He also estimated that 10 people were killed and several others were injured.

Police in Bauchi did not answer calls and messages seeking comment.

Ishola Micheal, the spokesman for Bauchi’s Governor Isa Yuguda, said he was aware of an incident in Azare but declined to confirm any details.

Bauchi borders Yobe state, one of three northeast states under emergency rule since May of last year because of Boko Haram violence.

The area has been attacked repeatedly through the uprising, which is estimated to have killed more than 10,000 people.

Some violence in the north blamed on Boko Haram has been the work of separate criminal groups.

While there was no immediate claim of responsibility, the targeted bombing in Azare resembled scores of other Boko Haram attacks.