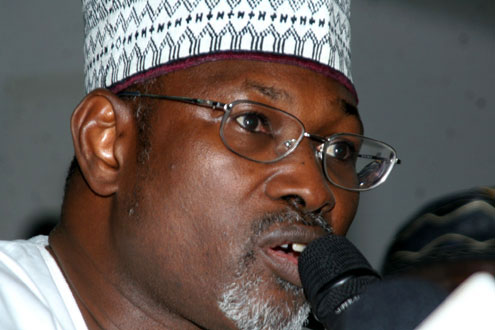 Reports from various parts of Ogun State, western Nigeria, indicate that people could not collect their permanent voter’s cards on Friday.

They were kept waiting for many hours without being attended to by the officials of the Independent National Electoral Commission, INEC.

The state governmenthad  declared Friday a work-free day and schools and markets were shut to enable residents who had been issued temporary voter’s cards (TVC) by INEC during the last voter registration exercise to visit their respective polling units where they registered and collect their permanent voter’s cards.

The conversion of TVC to PVC is scheduled to last three days, beginning from Friday till Sunday.

Findings around the state revealed that there was heavy turnout of prospective voters from the 20 local government areas of the state. They

were seen waiting patiently to be attended to.

Our correspondent, who went round the town to monitor the exercise reports that people came out en-masse to perform their civic responsibility but were disappointed by the attitude of INEC officials who seemed unprepared for the exercise.

From Ijebu Ode to Ijebu Ife, Ijebu Itele, Ogbere, Ogun Waterside, Okun Owa, Ijebu Ijesha, Aiyepe, Odogbolu, Ago Iwoye to Ilaporu, Awa, Ijebu Igbo down to Ipara Remo, Isara Remo, Irolu Remo, Akaka Remo, Ilishan Remo to Sagamu township, all in the Ogun East Senatorial District of the state, the situation was the same as there were complaints galore from the people over the ineptitude of INEC.

When our correspondent contacted a source in Ijebu East Local Government, he posted on his wall, “old men and women came out to collect their PVCs at my booth in Ijebu Itele this morning. As at 11.50am, we have not sighted any INEC official, let alone our PVCs.

The situation is the same in all the 32 wards in Ijebu East LG! Yet the INEC says it’s ready for 2015. Is this what to expect?”

In a release during the week by the state government, which was signed by the State Commissioner for Information and Strategy, Alhaji Yussuph Olaniyonu, he maintained that “Ogun State Government is committed to ensuring that every resident exercises his or her civic responsibility. Accordingly, the government advised all residents to take advantage of the work free-day and the weekend to partake in the crucial exercise of obtaining their PVC as the presentation of the card will be a pre-condition for all transactions with Government Ministries, Departments and Agencies, including schools, in the state.”

Yinka Faleye from Ward 3 in Ilaro in Yewa South local government area of the state informed our correspondent that they have been at the polling booths since morning but were shocked when they were asked to come back next week to collect their cards by the officials, having seen their names on the pasted lists.

“This is shocking; we have been here since morning because the state government has declared today as a work free-day basically for this exercise. We saw our names on the lists pasted on the wall but we were shocked when the INEC officials informed us to go back and come back next week, precisely, 12 November, 2014 for the cards as they can’t get the voter’s cards for us,” he said.

Also, speaking with our correspondent, Chairman of Yewa North local Government, Alhaji Tajudeen Amao, a.k.a. Pabida, who was at the UNA Primary School, Ijoun, said that though the officials came late, people trooped out en masse for the exercise and it was successful.

The situation in Imeko Afon was clearly different as the residents of the area were highly disappointed as no INEC official was around to attend to them and as at the time of filing this report, many of the residents were seen milling around the polling booths discussing the issue.

Confirming this to our correspondent on phone, the Vice Chairman of the Council, Waheed Ogundele and the former Majority Leader in the Council, Theophilus Olorode, said the officials have spoken with them and they have passed the information across to the people.

“The INEC officialsn have confirmed to us that ours is not ready and we have informed our people,” he said.

Also in Ota, one of the residents who identified herself as Mrs Airat Folake Agboluaje from Ward 8, Kosoosun, Sango, Ijoko, said they saw their names but could not get the permanent voter’s card as few cards were available.

“We saw our names and we were all happy but the unfortunate thing there is that only 21 cards were brought to the centre by the INEC officials and ours were not among those cards. We were asked to come back for it by 12 November and from all the people I called, the same date was given to them. I am still wondering the miracle they would perform between now and then, or maybe, the cards are on ground only that they were disturbed by the logistics,” she stated.

When our correspondent contacted the spokesman for INEC, Ogun State, Roland Dansu, he stated that “people should not fear, all those whose names did not appear in the voters’ list will be re-captured.”

Earlier in a release Friday morning by the INEC signed by the State Resident Electoral Commissioner, Sam Olumekun,  the commission said it will commence the distribution of cards and the continuous voter’s registration exercise from Friday, 7 November to Sunday, 9 November, 2014, and 12 November to 17 November, 2014 respectively.

“We wish to use this medium to assure the people of Ogun State that those names are in the Electronic Voter Register will surely collect the PVC in due course, if not during this exercise. However, those whose names do not appear in the register should use the opportunity of our CVR to register in their polling units or their ward centres as the case may be starting from 12 to 17 November, 2014.

“Accordingly, the Commission wishes to assure the general public that nobody will be disenfranchised from voting in 2015. The Commission appeals for the support and full cooperation of all and sundry in the critical matter,” Olumekun said.

The Commission, however, stressed that everybody will have the opportunity to exercise his or her franchise in 2015 elections.