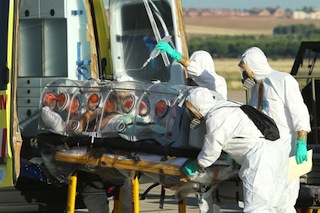 The European Union and its Member States have now pledged more than €1 billion in response to the Ebola crisis in West Africa.

This means the Union has already gone beyond the target set by the European Council on 24 October for €1 billion in assistance to stem the epidemic.

In a statement issued by the EU delegation on Friday, the continental body said it is boosting its investment in Ebola research, sending more material aid and providing new capacity for medical evacuations of international aid workers.

This announcement comes just ahead of the mission of the European Union’s Ebola Coordinator and Commissioner for Humanitarian Aid and Crisis Management Christos Stylianides and the Commissioner for Health, Vytenis Andriukaitis to the Ebola-affected countries in West Africa,

The European Commission, together with the European pharmaceutical industry, is also launching a €280 million call for proposals to boost research on Ebola to help address the current epidemic and manage future outbreaks.

The €280 million call for proposals, launched on Friday by the European Commission and the European pharmaceutical industry, is under the Innovative Medicines Initiative (IMI).

€140 million will come from Horizon 2020, the EU’s framework programme for research and innovation, and €140 million from the pharmaceutical companies which are members of the European Federation of Pharmaceutical Industries and Associations (EFPIA).

The call for proposals will use a new fast-track procedure to get successful projects up and running early next year.

The research will involve large-scale clinical trials of new vaccines in the Ebola-affected countries as well as the development of fast diagnostic tests and new approaches to manufacture and distribute vaccines.

The European Commissioner for Research, Science and Innovation Carlos Moedas said: “The EU is determined to help find a solution to Ebola. We are putting our money where our mouth is and boosting EU research on Ebola with an additional €280 million.

With this funding from Horizon 2020 and our industry partners, we are stepping up the development of new vaccines and medications to help save lives around the world”.

The EU also said it is beginning its biggest single operation of transporting material assistance with a Dutch ship sailing today from the Netherlands, loaded with ambulances, mobile hospitals, laboratories and other equipment to the affected countries.

The cargo has been provided by nine Member States (AT, BE, CZ, FI, HU, NL, RO, SK, UK) and UNICEF. The EU Civil Protection Mechanism is coordinating the operation.

“By pooling our resources, Europe’s efforts make a much bigger difference on the ground.

“At a moment when the availability of medical evacuations is such a crucial factor for encouraging more medical workers to join the Ebola response, I particularly welcome Luxembourg’s leadership on this priority with the contribution of specially equipped planes,” said Commissioner Stylianides.

Luxembourg has committed aeroplanes for European medical evacuation operations of international humanitarian workers diagnosed with Ebola, the first country to do so.

The two planes are retrofitted for the purpose with co-funding by the European Commission which will also finance the bulk of the transport costs for evacuations under the EU Civil Protection Mechanism.