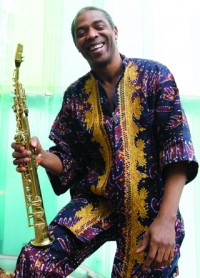 Afrobeat king, Femi Kuti, said the young and dynamic tendencies of Chocolate City made him sign a management deal with the international entertainment label.

In Twitter messages on Tuesday 4 November, Femi said he was bowled over by the Audu Maikori-led organisation’s great ideas.

“Signed a management deal with Chocolate City to manage me in Nigeria. Hopeful to do great things in Nigeria with CC…Yes I’ve been in business for a long time with a lot of international experience but what I love most about Chocolate City is that they are young and have great ideas too,” Femi said on Twitter.

This signing was coming in the wake of Femi Kuti’s 7th studio album release- No Place for My Dream.

Aibee Abidoye, Chocolate City’s General Manager, said the deal marks another significant milestone in Chocolate City’s development as the leading entertainment company in and around Africa.

He said the label loves good music and is a big fan of Femi Kuti and his work.

“The Afrobeat genre has found new interpretation through Femi’s prolific body of work and we believe that through this partnership, we will not only revive  the Afrobeat genre (distinct from Afrobeats) as a movement locally but also ensure that it is well positioned internationally and hopefully we can (finally) bring home that much deserved Grammy,” Abidoye said.

The record label already has rappers, MI and Ice Prince under its management.