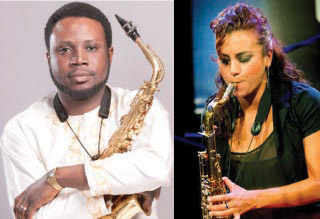 P.M.NEWS Entertainment Cafe learnt that the concert entering its fourth edition will hold at the Transcorp Hilton Abuja on Sunday 23 November. It will have Aremu headlining alongside American-Latino female saxophonist Jessy J, Kunle Ayo, Yinka Davis and Timi Dakolo.

This year’s co-headliner Jessy J has had a gang-buster career, scoring back-to-back hits.

Five years after making her debut she released her self produced album, ‘Second Chances’ which debuted in 2013 and reached a major milestone as she took over the reins as the producer of the new album.

Sax Appeal, Aremu’s brainchild is a jazz concert aimed at reaching the hearts of music lovers around the world by providing quality live performances from highly talented artistes within Nigeria and other parts of the world.

The first and second editions took place at the MUSON Centre, Onikan, Lagos in 2009 and 2010. The third edition held at the Expo Centre of Eko Hotels & Suites in 2011 with multiple Grammy Award winner Kenny G headlining.

It was well attended by the crème de la crème of society including Africa’s richest man, Alhaji Aliko Dangote, Senator Udo Udoma, Donald Duke and a host of others.