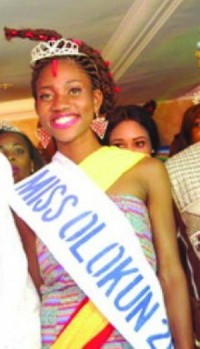 As part of the annual Olokun Festival, Miss Mariam Omolade Osoteku has emerged the winner of this year’s edition of Miss Olokun Pageant held recently in Lagos.

The crown, which was keenly contested by young girls across the 36 states of the federation, saw Osoteku, who represented Ogun State, winning the heart of the judges.

Miss Olokun Beauty Pageant is part of the all encompassing Olokun Festival 2014 edition.