No Provision For Persons With Disabilities, Says INEC 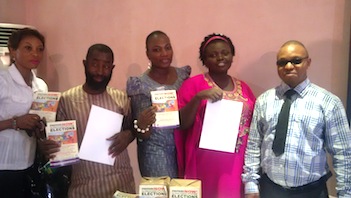 The Independent National Electoral Commission (INEC) has made no provisions in the 2015 general elections for Nigerians living with disabilities, an official said on Tuesday.

Lagos State Resident Electoral Commissioner, Dr. Adekunle Ogunmola, said in an interview in Lagos, western Nigeria, that the country has not developed enough to fully accommodate persons with disabilities during elections.

He said most persons with disabilities, especially those with visual impairment are not educated enough to make use of the braille.

He said physically challenged Nigerians visited him recently and he assured them they would be given the opportunity to vote. “But you see, our society has not really developed to what obtains in some other parts of the world,” he said.

He said the commission expects Nigerians to be accommodating and give them priority at voting unit.

“I do know as I told them that when physically challenged people get to the polling unit, Nigerians have a way of giving them priority when it comes to voting, so they will not be discrimitated against in whatever way.”

Ogunmola spoke in Lagos on 4 November shortly after attending a media launch of “Civic Education on Inclusive Voter Participation” organised by the State Accountability and Voice Initiative, SAVI.

“This is why as civil society players, we have taken up the challenge to enlighten and educate eligible citizens,” Obanubi said.

Nigerians with special needs, he added, have not adequately participated in past elections because of communication gaps, poor access to polling units and other factors beyond their control.

“We are optimistic that through partnering with the media, proper awareness would be created this time around,” he said.

‎Deaconess Beyioku Alase Adedoyin, Chairperson of Lagos State Joint Association for Persons with Disabilities and the Deaf Women Association of Nigeria, DWAN, urged INEC to make provisions for them.

“My experience during the last election is not palatable because all of us that are deaf, our disability is hidden,” she said.

She said most deaf people arrive polling units without interpreters‎ and with such communication gap, they cannot exercise their rights.