Produce Grasscutters, Save Our Environment 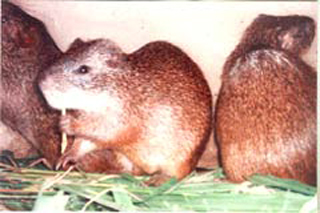 The United Nations, years ago set certain parameters to measure the effect of governance on human development in poor countries particularly Sub-Saharan Africa; bedeviled with deepening poverty. It was named Millennium Development Goals (MDGs). They cover critical areas like hunger, unemployment, malaria and other diseases and environmental degradation. With year 2015 set for the attainment of these goals just few months’ away, human development is still very low in many African countries.

Currently, report on the MDG showed that poverty is on the rise in Africa. Child mortality rates have also risen in sub Saharan Africa, which has 34 of the world’s 36 countries with child high mortality rates.  The worsening state of human development in Nigeria is not surprising.  How can Nigeria attain MDGs without addressing the inadequacies in her socio-economic set-up? Is it possible to eradicate hunger and poverty with food importation and oil-dependent economy?   Oil is not only an exhaustible resource; its job creation potential is also grossly limited.

Yet, the main target audience of MDGs lives in the rural areas and earns their livelihoods from agriculture. Consequently, about 70 per cent of people in rural Nigeria particularly women wallow in abject poverty with hunger and malnutrition being the greatest facets of their deprivations.

In other words, it’s not possible to eradicate hunger and poverty without reviving the nation’s agricultural sector. Agriculture is the bedrock of sustainable economic development and growth in Africa. Interestingly, grasscutter farming is among the cheapest livestock business that can create huge employment. How can Nigeria boost food production to eradicate poverty without at least one of these two factors? Grasscutter farming is a veritable poverty reduction measure that can turn-around the economic misfortunes of the poor and income seeking people. It generates income through healthy meat production, boosts human health and farmers’ income.

MDGs are not attainable without curtailing the unbridled exploitation of natural resources in the rural areas. For instance, bush burning, deforestation and over-hunting of grasscutters, this reduces valuable income and increases rural poverty. But grasscutter farming can help stem bush burning in our rural areas. How? Grasscutter domestication will reduce pressure on the animal in the wild thus reducing environmental degradation, create wealth and conserve biodiversity.

Grasscutter farming is less demanding of space and capital, farmer’s time and does not require much labour like crop-farming, thus making it the most ideal strategy to empower the unemployed who constitute the bulk of the poor and malnourished in Nigeria.

One of the major problems is what we do to our environment and everything we take in as food. There is no short cut. We should wean ourselves of our quick-fix mentality. We must not relent in our efforts to get it right for our generations unborn. Over-hunting, bush burning, pollution and deforestation are evils that will progressively destroy our environment if not checkmated now.

Hunters should be well adviced that it’s cheaper and safer for our environment to breed grasscutters than to hunt all of them to extinction without replenishment thereby destroying the eco-system. They should re-deploy their fire-power and energy in breeding grasscutter than hunting them indiscriminately.

Demand for grasscutter will forever remain high because people are becoming health conscious by avoiding the consumption of red meat that is loaded with cholesterol and toxins. Nowadays, consumers prefer chemical-free meat like grasscutter.

At JOVANA FARMS we remain committed to providing new farmers with prolific grasscutter breeding families and supplying the white-meat to top class hotels. We have what it takes to make you successful; if you desire to invest in grasscutter farming anytime. We are ready and experienced to train, guide and mentor you wisely from site survey, farm set-up and supply of fast growing animal species.

Attend Jovana Farms nationwide seminars nearest to you and know more opportunities in livestock production. Visit us at: www.jovanafarm.com, E-mail:[email protected] or Call: 080 33262 808, for more details.