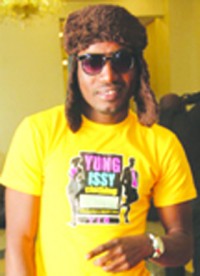 The new song is titled ‘Pere Dance’ and was produced by Chimbalin, a.k.a. Mr. BigBeatz.

Yung Issy said Pere Dance is a new dance style originated from the northern region of Africa and it will follow the success of Makossa, Alingo, Azonto, Shoki and others.

He said work is in progress to shoot the video of the new song alongside that of Fine Girl.