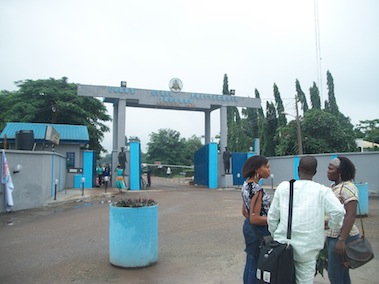 Security guards at the Lagos State Polytechnic, LASPOTECH, Ikorodu main campus have come under serious scrutiny following the way they perform their duties.

P.M.NEWS Campus Square findings revealed that the guards harass students of the institution unjustly in the guise of enforcing the school’s dress code.

Adebiyi Oreoluwa, a student who spoke with our reporter over what she described as “unnecessary harassment”, complained bitterly and called for urgent action by the school’s management before the students fight back.

“Can you imagine a security guard telling a female student that he is seeing her bra? That is how bad the situation is. These guys come to class and order female students to stand up to check if they are badly dressed.

“Where will such rubbish happen if not LASPOTECH?” she queried.

Another student simply identified as Olaide said: “last year, when we were having our first semester exams, my classmate was sent home from the school gate because the guards felt her skirt was too short for their liking despite our pleas.

“She only returned to the hall, about 45 minutes to the end of the paper.”

Bukola, a National Diploma 2 student, told our reporter that the situation is even better now compared to what the female students were made to face when the Islamic fasting period was on.

“If you come here when they start their fasting, you will pity us. These guys treat us like secondary school students just because they are trying to please the Rector who is a diehard Muslim.

“Are they trying to force us all to wear Hijab that is already causing trouble in the state owned secondary schools?” she lamented.

“This is a wake up call to the executives of LASPOTECH SUG. The incessant unnecessary harassment of students in the guise of enforcing the school dress code by the guards is becoming unbearable.

“I witnessed an ugly scene last semester that got me into a serious confrontation with the overbearing guards. I was coming into the school one Sunday morning and met them embarrassing an ND 1(Part Time) student. They accused her of wearing a reflective top which to me was very okay.

“I had to give her my T-shirt before they allowed her into the school premises. Two Sundays later, same ugly incident happened, this time, my classmate was badly embarrassed by the security guards to the extent one of the security guards was pointing to her breast and telling her that he’s seeing her bra. She wore an ankara dress made up to her chest and the remaining top was designed with lace material which the guard insisted was exposing her bra.

“This, to me, was unacceptable and a step taken too far. They went too far to have treated her that way. This got me angry and I gave them a piece of my mind. After all the noise, I had to give her my shirt again to cover up for the day.

Emeka further narrated: “A week afterwards, the worst happened. This time, I had to make it rough and unacceptable for them.

“An ND2 student who was wearing a legis trouser, and was supposed to write her Sociology test that morning, was sent back home in Ikotun by one of the guards wearing the Green uniform (not longer with the school security unit). Again, I was opportune to witness the ugly harassment.

“I did all I could to cause commotion and draw attention at the school gate and this got me into trouble with Mr. Aina a.k.a. Major, a security guard who demanded for my ID card. I willingly gave it to him knowing full well he would not do me anything because all I did was to fight against injustice.

“I reported the incident to my lecturers who later took it up by assigning my departmental president to go with me and the lady in question to the Chief Security Officer’s office (CSO), to register our displeasure.

“I was able to retrieve my ID the next weekend after an instruction was given to ‘Major’ to release it to me. This is a wake-up call to all executive members of the student’s representatives council to prove to us they are truly representing us not minding us being Par Time students.