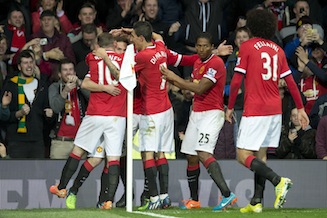 Juan Mata came off the bench to earn Manchester United a 1-0 win over Crystal Palace while Southampton have now had its best start to a Premier League season following a 2-0 win at home to Leicester City on Saturday.

At Old Trafford, both sides came close to breaking the deadlock in the first half but Luke Shaw’s low effort after a solo run from midfield was tipped wide, while former Red Devils forward Frazier Campbell lobbed over David de Gea and the United goal as the first half ended goalless.

Crystal Palace withstood pressure from the Red Devils, with Marouane Fellaini seeing a header cleared off the line while Wayne Rooney curled an effort wide as United endured a frustrating afternoon.

The Red Devils however earned the win through substitute Juan Mata, whose shot from the edge of the area took a slight deflection on its way to beating the Palace goalkeeper and putting United in front minutes after replacing Adnan Januzaj.

Mata came close to adding a second later on but would be content with giving the Red Devils a result which takes the club to sixth place on the table with 16 points, 13 points behind league leaders Chelsea that claimed a 2-1 win at Liverpool earlier on Saturday.