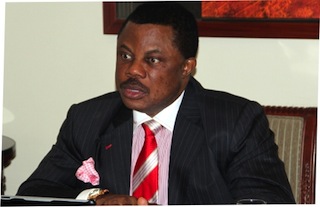 Anambra state governor, Chief Willie Obiano has called on the members of Batch “C” National Youth Service Corps (NYSC) to join hands with government to build and sustain a progressive, united and peaceful Nigeria. Obiano was speaking during the swearing-in of the Mandatory NYSC programme for 2,000 Batch C members Thursday at the NYSC temporary Orientation Camp, Umunya, Oyi Local Government Area of the state.

Obiano told the participants that “this exercise has opened a new chapter towards self-rediscovery and development for you and I expect you to embrace the programme with the seriousness and commitment to be the best in what you do.”

Obiano described the NYSC scheme as a national heritage for national integration which has over the years played critical role in the country’s evolution to nation hood and has remained imperative for national cohesion and unity.

The governor recalled the remarkable contributions made by corps members towards entrenching strong political institutions and structures, urging the present crop of corps members to emulate their predecessors and assist federal and state governments in the ongoing electoral reforms to deepen democracy in the country.

The Chairman, NYSC Governing Board and Commissioner for Youth and Sports, Ogbuefi Tony Nnacheta said the NYSC scheme has over the years fulfilled the fundamental purpose of a united Nigeria and building quality human infrastructure.

Ogbuefi Nnacheta charged them to use the opportunity offered by the scheme to explore the State and expand their perception of life.

The State NYSC Coordinator, Mrs Inyang Bassey Ekpe said the batch was the last of the service for 2014 Orientation courses for corps members.

Mrs Ekpe expressed gratitude to the governor for supporting and sustaining NYSC with his unrelenting efforts to make the NYSC Permanent Orientation Camp at Mbaukwu/Umuawulu, a reality.

Highlight of the event was the inspection of the Guard of Honour by governor Obiano and oath of allegiance by the corps members administered by the state Chief Judge, Justice Peter Umeadi who was represented by Ijem Onwuamaegbu.