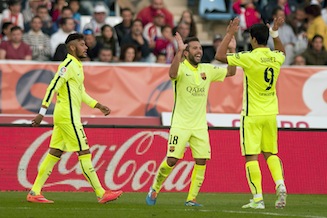 Two assists from Luis Suarez inspired Barcelona to come from behind and snap a two-game losing streak in La Liga with a 2-1 win at Almeria on Saturday.

Suarez had started the game on the bench alongside Neymar as Barca boss Luis Enrique made five changes from the side that defeated Ajax 2-0 in midweek.

However, both men were called into action at half-time after Thievy Bifouma had fired Almeria into the lead eight minutes before the break.

Suarez squared for Neymar to level the scores 18 minutes from time and his cross then teed up Jordi Alba to seal the three points nine minutes later.

Victory takes Barca a point ahead of Real Madrid at the top of La Liga, but Los Blancos can reclaim top spot when they host Rayo Vallecano later on Saturday.

Enrique’s decision to make a host of changes handed Pedro Rodriguez and Munir El Haddadi a start alongside Lionel Messi in attack.

But they did little to justify their selection, although Munir did force Ruben Martinez into a low save after the Almeria ‘keeper had blocked Messi’s effort from close range.

Martinez had to be at his best to stop Barca taking the lead just before the half hour mark as he scrambled to keep out Ivan Rakitic’s downward header and from the rebound Messi nodded onto the crossbar.

However, the visitors were caught out eight minutes before half-time as Messi lost possession deep inside the Almeria half and with one pass Barca were undone as Jonathan Soriano released Thievy and he raced past Bartra before calmly slotting past Bravo.

Enrique had seen enough in the first 45 minutes and swiftly introduced Suarez and Neymar for Munir and Pedro at the break.

It took 15 minutes for the substitutes to make an impact as Suarez acrobatically volleyed against the bar at the back post from a corner.

Suarez was the creator when Barca did eventually level as he turned his marker just inside the area and squared for Neymar to turn the ball home via a deflection off Ximo Navarro.

The Uruguayan was inches away from his first Barca goal moments later as he spun and sent a low shot just beyond Martinez’s far post.

Suarez then teed up Messi to sent another looping header off the crossbar as the pressure from the Catalans continued.

And they found the winner eight minutes from the end when after another burst from Suarez down the right he picked out the late arriving Alba from left-back to bundle home his first goal of the season.

Messi’s quest to become the joint top goalscorer in La Liga history was frustrated once more by Martinez in stoppage time, but Barca saw the game out to return to winning ways after back-to-back league defeats against Real Madrid and Celta Vigo.