Al-Makura promises to track down killers of his aide 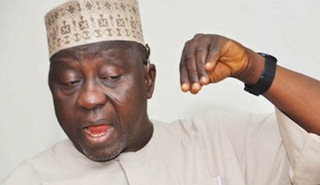 Governor Umaru Al-makura of Nasarawa state on Sunday, said those who killed the head driver of the state Government House, Abdullahi Mairuwa, “will not go scot free”.

NAN reports that Al-makura gave the assurance when he stopped over at the spot where the deceased was shot to death by some yet to be identified gunmen.

The governor decried the incessant killings and attacks along Lafia-Obi-Keana road and pledged to beef up security in the area.

NAN reports also that the governor, who visited Keana to commiserate with the family of the deceased, was received by the the traditional chief of the area and the senator representing the constituency.

Al-makura described the death as unfortunate and a great loss to the state.

He urged the family to regard the incident as an act of God, as no mortal would live beyond the time destined by God.

The governor used the occasion to urge people of the state to always be their brother’s keeper, and be patient with one another.

NAN recalls that late Mairuwa, aged 57, died as a result of gun wounds he sustained after he was attacked by gunmen on his way to Keana from Lafia on Friday.