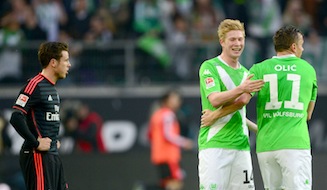 The 23-year old Belgium international provided superb passes for veteran striker Ivica Olic and attacking midfielder Aaron Hunt to score either side of half-time as Wolfsburg earned their eighth straight win in all competitions.

Pep Guardiola’s Bayern had opened a seven-point gap after Saturday’s 4-0 win at Eintracht Frankfurt, but second-placed Wolfsburg kept up the pressure on the Bavarian giants.

This was another impressive display from De Bruyne, who also created two goals in Thursday’s Europa League win over Krasnodar and last week’s 4-0 league win at VfB Stuttgart.

The Belgian has provided assists for nine league goals this season since joining Wolves from Stamford Bridge after a season on loan at Werder Bremen.

Later on Sunday, last season’s runners-up Borussia Dortmund need three points at home to third-placed Borussia Moenchengladbach to get off the bottom of the league table after five straight defeats.

Dortmund booked their place in the Champions League’s last 16 with two games to spare in Tuesday’s 4-1 win over Galatasaray, but Jurgen Klopp’s side are enduring their worst start to a league season in the club’s history.

After Freiburg and Werder Bremen both picked up wins on Saturday, Dortmund dropped to last place for the first time in seven years having picked up just seven points in their opening 10 league fixtures.

On Saturday, Bayern romped to victory at Frankfurt as Germany winger Thomas Mueller claimed a hat-trick.

Germany defender Jerome Boateng also set a new Bundesliga record of 50 games unbeaten in matches in which he has played for Munich.

Having been rested for Wednesday’s 2-0 home win over Roma, which confirmed Bayern’s place in the Champions League last 16 as group winners, Mueller opened the scoring from a Franck Ribery pass at the second attempt on 23 minutes.

The 25-year old then boosted his tally with two goals in three second-half minutes before Swiss winger Xherdan Shaqiri grabbed their fourth on 86 minutes.

Werder Bremen’s 2-0 win at home to VfB Stuttgart lifted them up to 15th, which put Dortmund bottom for the first time since August 2007.

Hoffenheim dropped to fifth after a lively 4-3 defeat at home to Cologne while Leverkusen, who won 2-1 at Zenit St Petersburg on Tuesday to stay top of their Champions League group, were held to a goalless draw at home to Mainz and drop to sixth.

Schalke are 11th after suffering their third defeat in the six matches since Robert di Matteo took charge as they lost 2-0 at Freiburg thanks to goals by Christian Guenter and Jonathan Schmid.

Augsburg moved up to seventh with a 3-0 win at mid-table Paderborn as midfielder Tobias Werner scoring twice while Hanover 96 are fourth after Friday’s 2-0 win at Hertha Berlin.