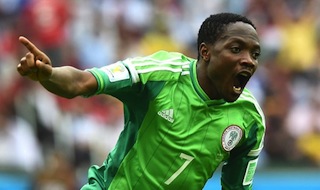 President of Nigeria Football Federation, NFF, Mr. Amaju Melvin Pinnick has declared that none of the other players on the list of 25 players released by the Confederation of African Football for the 2014 African Player of the Year has done more than Super Eagles’ stars Vincent Enyeama and Ahmed Musa to merit the award.

CAF on Thursday listed 25 players, including Ivorian Yaya Toure – who has won the award in the past three years – in the initial pool for the Player of the Year award, ahead of a shortlist of five that will be released early December.

“If we look critically at the list, it would be difficult to see any player who has done more for club and country in the outgoing year than Vincent Enyeama and Ahmed Musa.

“Both were in fabulous forms for their clubs (Enyeama with Lille OSC of France and Musa with CSKA Moscow of Russia) during the year, and also played brilliant roles as the Super Eagles reached the Round of 16 at the FIFA World Cup finals in Brazil,” Pinnick stated.

The factional NFF boss made it clear that he was in no way disrespecting other players on the list of 25. “I have immense respect for most of the players listed, particularly Toure, Asamoah Gyan of Ghana, and the Algerian trio of Slimani, Feghouli and Brahimi who also steered their team to the Round of 16 at the World Cup.

“Yet, the exploits of Enyeama and Musa in the outgoing year have been exceptional. Either of them deserves the award.”

Eagles’ goalkeeper and skipper Enyeama made a number of telling saves at the FIFA World Cup in Brazil and was also brilliant for French Ligue 1 club, Lille OSC all through the year, while nimble–footed Musa became the first Nigerian senior team player to score two goals against Argentina in a competitive match, when he netted a brace against the Argies in a World Cup group phase game in Porto Alegre.

Musa also scored two goals against Sudan in a 2015 Africa Cup of Nations qualifying win that has given Nigeria hope of reaching the finals. Both Musa and Enyeama are currently playing critical roles in their clubs’ European campaign, with Musa influential for CSKA Moscow in the Champions League and Enyeama playing his role for Lille OSC in the Europa League.

Globacom, a Nigeria’s telecommunication company, has been sponsoring the awards for the past eight years.