Misfiring Balotelli back for Italy as Conte names squad for Croatia 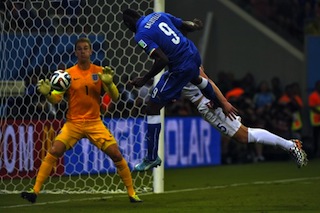 Misfiring Liverpool striker Mario Balotelli has been recalled to Italy’s squad for next week’s Euro 2016 qualifier against Croatia in Milan alongside Alessio Cerci of Atletico Madrid.

Balotelli had been left out of the Italy set-up by new coach Antonio Conte following the first round exit from the World Cup under former coach Cesare Prandelli.

Cerci failed to make the trip to Brazil but is included in a 26-man squad named on Sunday night by the Italian Football Federation (FIGC).

Torino defender Emiliano Moretti and midfield pair Andrea Bertolacci (Genoa) and Roberto Soriano (Sampdoria) are among the debutants as Conte looks to freshen his squad ahead of the 2016 European Championships.

Italy sit second in Group H, but only on goal difference, behind Croatia after winning their three opening games.

Southampton striker Graziano Pelle scored Italy’s winner on his debut away to Malta in their last outing as former Juventus handler Conte left Balotelli on the sidelines.

Croatia are considered Italy’s toughest rivals in Group H and Conte said he expected Sunday’s game to provide “answers” about his side’s potential.

“Croatia are doing well at the moment and they are a great team with a great outlook.

“Currently, we are behind other national teams like Germany, Spain, the Netherlands, Belgium and France. We are aware of the serious problems that Italian football has, but we know we have time to solve these problems.

“Now the important thing is that we qualify for the European Championships and then we will work on doing something extraordinary in the month we spend in France.”