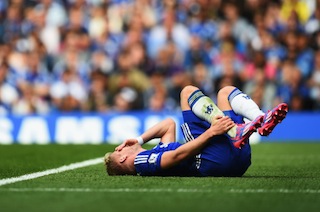 Chelsea’s Germany winger Andre Schuerrle has been ruled out of Friday’s Euro 2016 qualifier against minnows Gibraltar and the friendly away to Spain after battling with an infection last month.

The 24-year-old, whose extra-time cross led to Mario Goetze’s winning goal in July’s World Cup final for Germany, has told head coach Joachim Loew he will stay in London to work on his fitness during the international break.

The winger will be the only player missing from Monday’s function in Berlin when Germany’s 23-man World Cup winning-squad are presented with the silver laurel leaf, the country’s highest sports award, by president Joachim Gauck for their Brazil 2014 triumph.

The team will later attend the premiere of the film ‘Die Mannschaft’ a behind-the-scenes documentary into their World Cup campaign before preparing for Friday’s international in Nuremberg against Gibraltar, four days before their away match against Spain in Vigo.

Schuerrle last played in Germany’s shock 2-0 defeat against Poland last month, but missed the 1-1 draw with Ireland due to illness which left Germany third in their Euro 2016 qualifying group with Poland top and Ireland second.