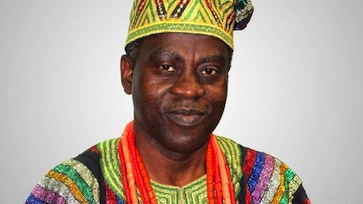 Oladimeji Adisa, who runs the Osun Foundation, has been honoured by the UK Prime Minister, David Cameron for his work in raising awareness of African culture.

Liverpool-based Adisa was given a Point of Light award for teaching people about African heritage.

Adisa has been running the arts initiative, which hosts a variety of activities such as cookery classes and mask making, for two decades.

The foundation has been involved with several high profile cultural performances, including the Queen’s Jubilee and Commonwealth Games.

Mr Adisa has also worked with 500 schools around the UK with the aim of helping people understand Britain’s multicultural society.

He said it was “something special” to be chosen for the award “when there are so many people out there doing great things”.

Point of Light awards recognise outstanding individual volunteers who are inspiring others.

They were developed in partnership with the Point of Light programme in the USA established by President George H. W. Bush.

Adisa who also is the editor-in-chief of magazine “Come To Nigeria” has influenced many in the UK and beyond. He created the publication to highlight the positive aspects of Nigeria including its heritage, culture, fashion, sports, music and business world.