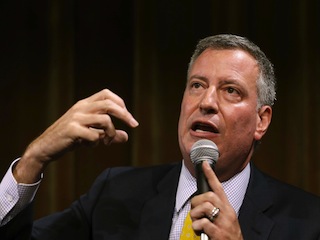 People in New York carrying only a small amount of marijuana will not be arrested, Mayor Bill de Blasio said Monday, adding to a growing debate in the United States over pot.

Starting November 19, anyone carrying less than 25 grams (0.9 ounces) of pot in New York will instead likely be fined up to $100.

“Too many New Yorkers without any prior convictions have been arrested for low-level marijuana possession,” added de Blasio, whose daughter Chiara last year revealed in a YouTube video that she had smoked while in college.

De Blasio said the relaxation in policy was particularly aimed at young people who would no longer have a criminal record for the rest of their lives because of an “error.”

“This is part of a long-term effort to make us safer,” he added.

Bratton said that possession of less than 25 grams would be considered “a violation, not a crime.”

Proponents of a more relaxed policy on small amounts of marijuana possession say it will free police up to spend more time on serious crime.

Alaska, Oregon and the US capital Washington voted to legalize marijuana last week — a new high for the marijuana lobby, two years after two western states — Colorado and Washington — led the way in approving cannabis for recreational use.

But opponents say the drug causes long-term psychological damage, especially in people who used it in their youth.