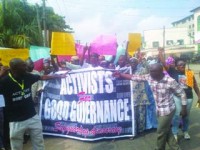 Protesters stormed the Lagos office of the Independent National Electoral Commission, INEC, on Monday to complain about the shoddy distribution of the permanent voter’s cards, PVC, in the state.

The protesters stormed INEC’s office in Yaba, Lagos, southwest Nigeria, at about 9:50am on Monday with placards protesting the attempt to disenfranchise Lagosians by allegedly hoarding the PVCs.

The protesters chanted solidarity songs and vowed that they would never allow elections to be rigged in the state.

There was tight security as scores of policemen armed with guns ensured that the protest did not degenerate into violence.

The protesters, under the aegis of Activists for Good Governance, carried placards and blocked the road leading to INEC’s office. There was traffic gridlock in the area.

Some of the placards read: “We Lagosians detest rigging, give us our PVCs,” “Lagosians reaffirm one man, one woman, one vote, give us our PVCs, period,” “Jega, be warned, don’t act FG’s script in Lagos,” “We beg ‘una’ to give us our cards,” “The totality of Agege Youth, women and men are demanding an extension for PVC collection,” “INEC, Agege demands more time for our PVC collection,” “Please, our 1.4 million PVC cards,” “ We want free and fair election,” and “All Nigerians are equal.”

Spokespeson of the protesters, Comrade Declan Ihekaire said Nigerians were afraid that INEC is planning to rig next year’s election, especially in states controlled by the All Progressives Congress, APC, which informed the hoarding of the PVCs from getting to the people.

“2015 is here already and any attempt to disenfranchise Nigerians will mark the beginning of action. What we see is that INEC is short of staff and you are already being nicknamed as trying to rig the election next year,” he told the INEC Resident Electoral Commissioner, REC, Lagos State.

As the Activists for Good Govrnance completed their protest, another group, The Nucleus Group, TNG, came with hundreds of people, with placards to protest the denial of Lagosians from collecting their PVCs.

The TNG protesters carried placards, some of which read:  “Lagosians cannot be intimidate, “INEC has disappointed Lagosians,” “Stop all the colluding, give us 1.4 million registered PVCs,” “Enough of your show of shame INEC, We need our PVCs,” and “Give us our PVCs now.”

Spokesperson of TNG, Comrade Olusola Odubiro called on INEC to extend the exercise by two weeks so that all Lagosians would get their PVCs.

He lamented that the performance of INEC in the ongoing exercise had been so poor as only one INEC officer is asigned to one polling unit with lots of people queing to get their PVCs.

According to him, TNG is suspecting foul play by the powers that be to rig the election in Lagos next year.

Responding to the protesters, INEC’s REC, Lagos State, Mr Adekunle Ogunmola admitted that the agency had been encountering problems in the distribution of the PVCs in Lagos, but assured that by the time it completes the exercise, every Lagosian duly registered would get his or her PVC.

“Our intention is to ensure all registered voters in Lagos State get their PVCs before the 2015 elections. There have been hiccups; we are only distributing materials given to us. On the 1.4 million voters removed from the list, we have reasons for that.

“In Mushin yesterday(Sunday), we have distributed PVCs to 529 polling units. By the time we complete the 11 Local Governments, all will be captured. We are also doing continuous voter registration to capture everybody,” he said.

Meanwhile, governorship aspirants on the platform of the APC in Lagos State, lawmakers at the House of Representatives and the State House of Assembly have raised alarm over the poor distribution of the PVCs in their domains, with some alleging that it could be a ploy by both the INEC and the Peoples Democratic Party, PDP, to disenfranchise the people of the state ahead of 2015.

Some of the lawmakers and governorship aspirants described the exercise as a flop, wondering how INEC could still fail in spite of its preparations that lasted for months.

Speaker of the Lagos State House of Assembly, Adeyemi Ikuforiji, who is also an aspirant for the governorship seat, described the hiccups surrounding the failed distribution as “shoddy and unfortunate.”

Ikuforiji lamented that the INEC officials were absent on Friday, the day the exercise commenced and that as a result, many residents could not collect their voter’s cards.

“It is not only sad but totally unacceptable for the Independent National Electoral Commission, INEC, to have treated the people of Lagos State with so much disdain with the shoddy and uncoordinated manner in which it handled the much-publicized distribution of the permanent voter’s cards over the weekend.

“It was not funny at all. INEC said it would distribute the PVCs in only 11 out of the old 20 Local Government Areas of our state for three days in the first instance, only to come out later to reduce that number to seven. And at the end of it all, it was confusion all the way.

“The annoying aspect of it all was that highly patriotic citizens of Lagos State had trooped out to collect their cards only to be disappointed at the end of it all. It is very disappointing that the distribution of ordinary permanent voters’s cards could be this problematic for an agency of the Federal Government like INEC in this age of modernity and information technology.”

Another governorship aspirant, Leke Pitan, described the distribution exercise by INEC as a sham and a clear attempt at some political mischief.

According to Pitan, the conduct of the exercise in the state is clearly an indication of the plans of INEC to short-change the people of the state.

“The exercise is a sham and it’s shameful. We still try to play funny games with the conduct of a simple exercise as the permanent voter’s cards collection in this country.

“Are we saying this exercise is not planned for? Or that the time is short again, the usual excuse for failure at this level?” he queried.

He further wondered “what the thinking and the subterfuge plans of INEC and their collaborators were. This is clearly a perfidy against the people of the state and we all should ensure that they do not succeed in sabotaging the exercise in the state.

“Lagos State is clearly the most populous and still growing in the country; you can only imagine the number of people entering the state daily from all over the country.”

On his part, a member of the House of Representatives, Lanre Odubote, asked the chairman of INEC, Prof. Attahiru Jega, to resign his position in order to give room for competence.

Speaking in Epe, at the commissioning of a block of three classrooms and a staff room he built and donated to the LGA Central School, Agbowa, Epe, Odubote, representing Epe Federal Constituency, said the postponement of the distribution of the PVC in eight local governments in the state including Epe is an indication that Jega cannot be trusted with the bigger responsibility of managing the 2015 elections.

He said the postponement of the distribution of the cards in parts of the state is only part of the lack of capacity that Jega has shown in the discharge of his responsibility as witnessed in the shoddy PVC distribution exercise.

He said: “voter’s card is being given to all Nigerians, but Epe is being denied their right. We have lost confidence in Jega’s ability to be fair to our people, and his ability to conduct a credible 2015 polls.

“So, my advice for Jega is that he should resign now, because if he cannot manage ordinary voter’s register, we do not know how he wants to manage a credible 2015 elections. Now is the time to stand up and ask him to go before he does more damage to the nation’s electoral process. We have lost confidence in him, so he should resign now and go.”